The Ask Why Rule

You are entitled to know why you are doing something.

Do you remember being three or four years old? I don’t, but I have a five-year-old boy and a two-year-old girl running around the house to show me how those times must have been. Do you know the question they ask the most? It’s “Why?” “Why is the sky blue? Why is the grass green? Why do I need to take a bath? Why has the fish been sleeping upside down for the past 3 days?” We all know how challenging and, sometimes, uncomfortable this game can become, but, at the same time, it’s so inspiring to see raw curiosity taking over. Still, for some reason, as we grow older, we tend to lose this almost irritating spirit of inquiry. For the loss of the world. I can’t tell you exactly why this happens but I can show how impactful this simple question can be.

First, a history lesson. A short one, I promise.

Back in 1937, Toyota was starting its car manufacturing business, envisioning a future where they could compete with the big European and American car makers. That was not an easy task for sure, and Toyota knew they needed a different and smarter way to manufacture. The result is what is now known as the Toyota Production System by Sakichi Toyoda, his son Kiichiro Toyoda, and Taiichi Ohno. The Toyota Production System focuses on removing waste, smooth production, and continuous improvement. It also introduces us to the rule of the Five Whys.

The idea behind this rule is to find the cause of a problem by asking why five times. For example, imagine that the production line at Toyota stopped. First why: Why did it stop? Because the guy that has to screw the screw didn’t have time to do it. Second why: Why didn’t he have time? Because he didn’t know how to use that wrench. Third why: Why didn’t he know how to use it? Because he only started to work at Toyota three months ago. Fourth why: Why, after working here for three months, he still can’t do it? Because we didn’t train him. Fifth why: Why didn’t we train him?  Because we don’t onboard people properly.

So that’s the problem. The continuous process of asking why helps us get to the heart of the problem and fix it, instead of focusing only on one of its intermediate side effects. But we tend to take it out of the equation because, let’s be honest, that’s a lot of work. The point that I want to make is that it’s all worth it.

Asking Why, But Why?

Let’s rewind a few years, back to 2014. August 4, 2014, to be accurate. That was the day I joined OutSystems straight out of the exciting and dangerous life of a professional services consultant in a company that had a contact center platform. This is where I had spent my life in the entangled world of VOIP, CTIs, PBX, IVRs, and high-performance routing scripts.

That said, I’d never worked professionally with web or mobile development much less with low-code. Still, seven months after joining OutSystems as a delivery manager, I moved to a different team as an architecture expert. Today, I’m the digital strategist on the OutSystems digital team, dealing with problems as diverse as big data, identity management, digital collaboration, and microservices. This is where the very first principle of our culture book comes in handy: the ask why rule.

The ask why rule says that I’m entitled to know why I’m doing something; moreover, I’m entitled to question if we’re on the right path if I think we’re not. And this is powerful. 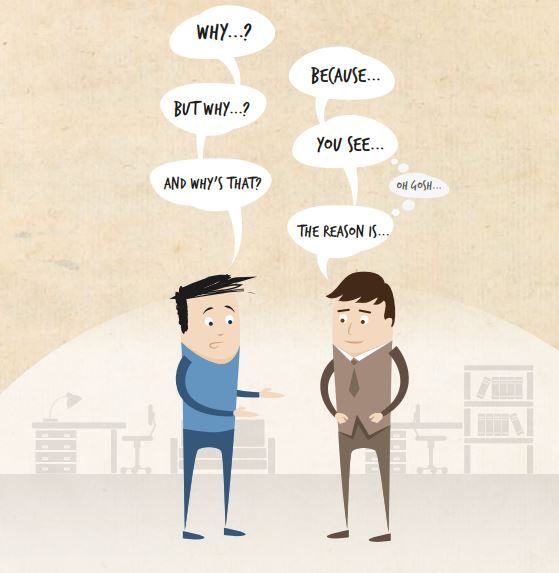 In my case, having no background in low-code, I (annoyingly) questioned my team about our goals, about what we were doing, about how we were helping our customers and business. And so I was able to learn faster, understand faster, and also create an impact faster.

With the freedom and comfort to question why you’re doing something, you can get the big picture, understand how your work fits in the company’s ultimate goal, and determine if your skills are being used in the best possible way.

This is almost a way of life, maximizing and growing each person’s skills while we walk our common path towards the company’s vision. If I tell you why you’re doing something, I’m enabling you to figure out the how and the what. This leads to more self-sufficiency, faster decisions, greater impact, and also happier people.

Let’s look at it from a different perspective. Imagine you work in a kitchen, and your only job is to beat eggs day after day. You have no idea what those eggs are being used for. Would you like to work in a place like that? I know I wouldn’t. But what if you knew that your beaten eggs were going to be used in a child’s birthday cake with a superhero on top, the kid was going to love it, and he would remember that cake for the rest of his life? That will give you a different motivation to continue to beat those eggs. More than that, you might even get a mixer and look for ways to make the cake even better. And when I say eggs, it can be a button for an app, a screen, an article; it can be anything. That’s the difference that comes from asking why and knowing the purpose of your work.

But that’s just part of the picture. It’s important for you to ask why, but it’s just as important to have someone willing to answer your questions, but not with a simple “because I said so.” A true leader answers your questions, shows you the vision and prompts you to proceed with creative and innovative solutions, but is also humble enough to tell you “I don’t know” or “I need your help on this.” Imagine how good and rewarding it is to work in a company where you see this behavior anywhere you look.

The Fear of Not Asking Why

By now I think you figured out that the ask why rule is something I hold dear. I believe it is the foundation for every other rule that follows. But it’s not always smooth sailing. It takes work and discipline. I’m an engineer, and therefore a man of systems and frameworks. Those are the things that allow you to be disciplined.

In his book called Start With Why, Simon has something he calls the “Golden Circle.” It consists of expanding concentric circles. “Why” is in the center, then “How” and then “What” as you move outward. 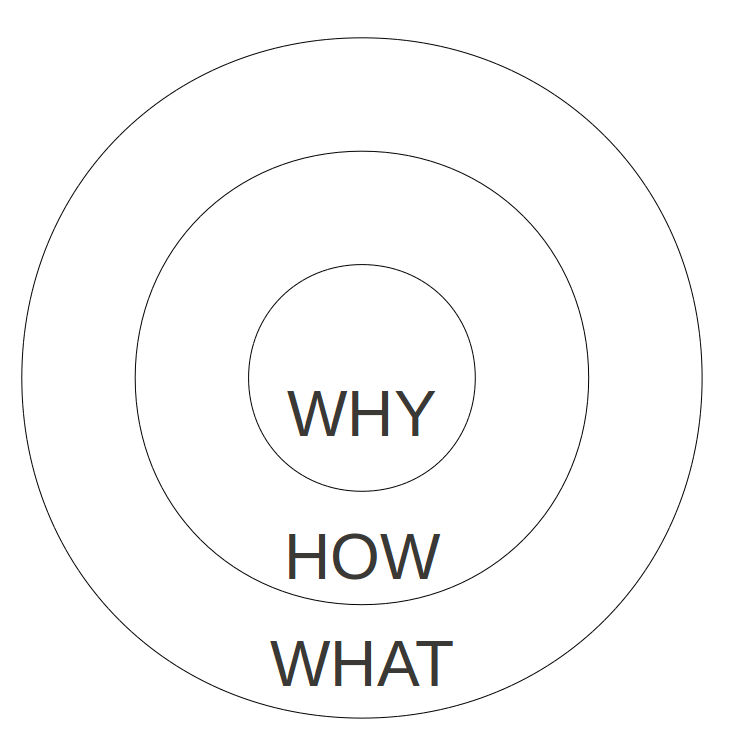 Simon’s point is that everyone knows what they are doing, some know how they do it, and only a few know why they do it. Many business conversations use this flow. True leaders, however, reverse it so it becomes “Why,” How,” “What,”͐ and that’s why some companies succeed and others fail.

Simon uses Apple to illustrate the point, and so will I. When Steve Jobs founded the company, it was to sell computers. But now you can buy pretty much any technological item from them: laptops, smartphones, mp3 players, and headphones. When did Apple learn how to build headphones? Very recently (if ever). So, why are its products an instant success? Because anything they do is focused on thinking differently and challenging the status quo.

How they do it is by beautifully designing any product so it’s simple to use and has a great user experience. Once you get there, what you’ve created is irrelevant. They design computers just like they do mp3 players and smartphones.

That’s the kind of exercise I like to do before starting any project. In my role as a digital strategist, my ultimate goal is for those who interact with OutSystems to have a great experience, whether they are customers or collaborators. Let me give you an example.

My team has been doing a lot of work on the OutSystems Community and not just because we thought it would be fun. So, we exercise a “start with why” framework to make sure we are on the right track:

Simple, right? Maybe it requires some practice, but the results are indisputable. If you submit any idea to this type of scrutiny, you are absolutely sure that when you decide to commit to the project. It will have a real impact on the lives of the ones involved and prevent you from wasting time, effort, and hours of sleep on an initiative that does not connect to our vision and goals.

The Power of Culture

Asking why is how you know you are working on the right things. It promotes alignment and makes sure that we, as a company, move forward. It’s true that’s not always easy. People have different reactions to it. We work with different companies with a different culture, and not all of them perceive our behavior the same way. Some react with surprise, some defensively. But one thing is for sure, once I explain why I ask why, I have yet to find a person that thought that it was a bad idea.

At OutSystems, we have that rule written down in a book, but we probably wouldn’t even need to. It’s a cultural thing and culture lives beyond formality. Culture is in the word-to-mouth. But this formality of having it written down is great to give to the newcomers the comfort and even entice them to ask why. So I’m glad we have that rule. It only helps us be better professionals.

How can you avoid a big crisis? Look for the telltale signs early and deal with them then. In our continuing series about the Small Book of 7 Big Rules, Solution Architect Director Daniel Lourenço shares his experience with the "small crisis" rule.

OutSystems was established because our founders wanted to challenge the status quo of software development. Is it any wonder, then, that it's one of our "big rules?" In this blog article, Shiri Friedman, Director of Partner Marketing, explains how she challenged the status quo and turned the OutSystems partner marketing program into a consistent, scalable, and global powerhouse.

One day you're coding along, getting lots done, when suddenly, you get stuck. If you work at OutSystems, this is not a problem. Someone is always there to lend a hand. In this post, Software Engineer Lara Luis shares how the "be helpful" rule from our small book of rules makes an impact on her daily work.