Deal with a crisis while it is small.

You know how in any horror movie the main character never pays attention to the small details that reveal a catastrophe is about to happen? I mean, if I’d just bought a house in the middle of nowhere with a creepy doll in it (which I’d never do), I would take the strange noises and the moving doll as a sign that something isn’t right and probably sell or even burn the house. Nip it in the bud!

I know, that would probably ruin the whole story, but wouldn’t you do the same? Well, that’s kind of how this story goes.

Four years ago, I moved from Lisbon to Singapore to open the very first OutSystems office in the Asia Pacific region. In case you don’t know, there are about 14,971 kilometers or 9,302 miles between the two cities, and a time difference of seven hours—eight during the winter. Try to book meeting with someone across the Indic in that short time frame. It’s hard. Very hard. You have one or two working hours that overlap to book meetings, reply to emails, or chat in Slack. 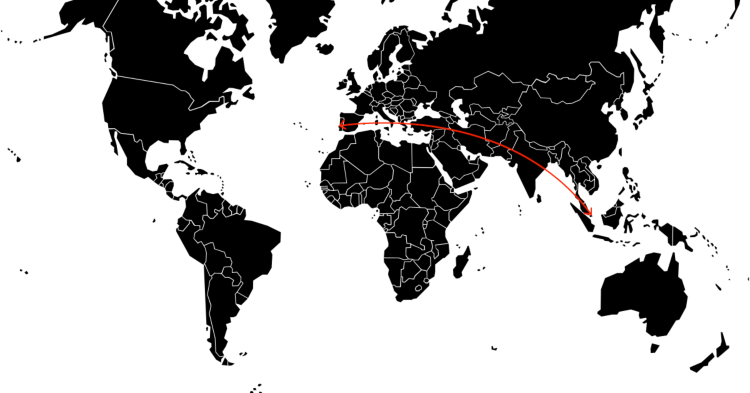 When you’re launching a new office, you can’t just cut the umbilical cord that connects you to the main offices. I’d been with OutSystems for a few years, first in services and then in solution architecture. No matter how complex the product is, I knew what I was selling. But, there were only five of us in that new office, one for each department, in a country with a culture that is way different from the European one I was used to.

It was challenging to get quick answers from our teams in Lisbon and Atlanta. If I were in the middle of a deal, and a prospect asked me when feature X would be available, I couldn’t just say. “Well, I’ll let you know in eight hours.” If you work in sales, you know how fast everything moves. You need to be quick or else your prospect will start looking for another solution. In sales, never underestimate the expression “time is money.” But those were the sort of things we needed to do.

You can imagine how those times were. Our team was under a lot of pressure to make everything work in Singapore and in the Asia-Pacific. At the same time, our fast and nimble processes were now hindered by long response cycles and lack of cultural context. In addition to these challenges, the geographical distance wasn’t much help.

From an outsider’s perspective, time zone and geographical distance may not seem like a big challenge. You have internet, they say. You’re connected 24/7, they say. And we tried. I was booking meetings at night, people from other offices were waking up a few hours earlier to add a couple of extra hours to our overlap. But that was still not enough.

We reached the boiling point when we lost an important deal after dragging out the process and missing the deadline. If this were a horror movie, this would be the part where you see the eye of the devilish creature in the midst of some dark woods ready to attack the main character, even after being warned time and again to run away and leave everything behind.

But we wouldn’t let this happen again. We needed to change how we were organized. That meant aligning headquarters and the Singapore offices and increasing the communication from both sides. In other words, here’s what we needed to do:

And the truth is, we’re now one of the best selling regions in the company. We've over 50 people working in the Singapore office, and only this year, we’ve opened new offices in Tokyo, Sydney, and Hong Kong. Things are going well.

Our Small Book of a Few Big Rules says:

"Fixing a big crisis can be costly, but if we address it while it is small, it won’t fester and grow into a major problem. Most of the time the negative side effects of a big crisis are impossible to fix."

This story would probably have a different ending if we hadn’t paid attention to the signs and fixed that small crisis when it started to show. The different time and geographical zones and communication between the offices led to the loss of an important deal. That small crisis could have been just the beginning of a bigger crisis.

In a different multiverse, if we had continued the way we were, maybe OutSystems wouldn’t have succeeded in Singapore or in the Asia Pacific. Maybe we wouldn’t have helped customers like Toyota, Surbana Jurong, or AOI Pro. transform their businesses. And maybe I wouldn’t still be in Singapore where I’ve spent four wonderful years so far.

It was important to realize that “business-and-communications-as-usual” weren’t working for us or our customers in Singapore. Once we fixed the problem, the rest just blossomed. In my perspective, that’s what our small crisis rule is all about.

Hey, looking back now, I don’t think it ruined the story after all.

Do you have what it takes? Then we’re looking for you! From Boston and Lisbon to Hong Kong and Singapore, we’re hiring for the four corners of the earth.

OutSystems was established because our founders wanted to challenge the status quo of software development. Is it any wonder, then, that it's one of our "big rules?" In this blog article, Shiri Friedman, Director of Partner Marketing, explains how she challenged the status quo and turned the OutSystems partner marketing program into a consistent, scalable, and global powerhouse.

One day you're coding along, getting lots done, when suddenly, you get stuck. If you work at OutSystems, this is not a problem. Someone is always there to lend a hand. In this post, Software Engineer Lara Luis shares how the "be helpful" rule from our small book of rules makes an impact on her daily work.

When there's a big project coming up, you have to break it down. Solange Ferreira explains what it means to work 80/20 in the latest episode in our series on the Few Big Rules.