When Hermes—a top-five courier, express, and parcel operator in Europe—launched their new Hermes BorderGuru business unit, they had a problem. They lacked track and trace visibility of individual parcels as they crossed borders. To solve this, they had to integrate their international freight system with their European delivery system, and they required a solution in weeks, not months.

Product Owner Tobias Latta turned to OutSystems. Within three months, Hermes BorderGuru’s delivery network was humming. Now, thanks to two OutSystems apps, Hermes has full visibility of every parcel and truck, as they process 20 million cross-border parcel deliveries each year.

The Hermes Group is one of the largest courier, express, and parcel operators in Europe, with revenues of 3.2 billion euros. In 2018, the group launched Hermes BorderGuru (“HBG”), a new global delivery service aimed at e-commerce retailers and international manufacturers. This all-encompassing service includes logistics, payment systems, and customs clearance, all the crucial ingredients for successful cross-border e-commerce.

Initially focused on Chinese suppliers that want to deliver direct across Europe, BorderGuru has enjoyed double-digit growth. Hermes expects to deliver up to 20 million cross-border parcels in 2019, of which 5 million come from China. 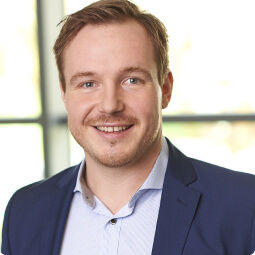 With such dramatic growth, some aspects of BorderGuru’s IT systems needed enhancement, as Tobias Latta, IT Product Owner for Operations, explains. “Twenty million parcel deliveries might sound a lot, but that’s just a fraction of our European business. So, the HBG business unit needed to operate using two long-established and highly functional logistics systems. One dealt with the international freight side of our service, and the other with the European delivery network.”

However, a lack of integration between the two systems led to blind spots. HBG and its customers knew when a parcel started and ended its journey, but there was a blind-spot in the middle.

Tobias explains further, “Parcels enter Europe at one of two freight hubs. Here we split shipping crates into the individual parcel deliveries. Each parcel then enters the local delivery network. From that moment, the parcel’s progress became invisible to the customer until it arrived at its destination.”

Although security, scalability, and performance were important, the crucial consideration was adaptability, as Tobias explains, “HBG is still a new business unit, so processes will continue to evolve. Plus, we will expand this service to the rest of the world, where systems and processes might vary. These factors made adaptability the most important consideration. We invited OutSystems to do a two-day proof of concept, and the speed and quality of development gave us the confidence that OutSystems was the right approach.”

Working with OutSystems partner Jade Eli Technologies, Tobias adopted a lean, iterative approach to development. The first solution they delivered was called TrApp – Transit App. The team of two developers delivered a working MVP in just eight days, saving around 60% of the development time previously estimated for a hand-coded approach.

Within two months the MVP had been iteratively enhanced into a productive system, that now includes the following capabilities:

The second solution delivered by the team was called TrIp – Transport Information Platform. Developed from the same backend as TrApp, this system provides consolidated information on the status of parcels during transportation, from the Hermes hubs and warehouses to their destination.

“A great thing about the OutSystems development process was how reuse speeded up our development,” says Tobias. “It only took two days to develop the basic TrIp solution, as we were able to use all the backend services from TrApp.”

In just two months, HBG had the customized logistics solution that they needed. The OutSystems apps enabled them to provide a joined-up service for their international clients. Now HBG operations and their customers have end-to-end visibility for any parcel, all the way from China to destination, including every warehouse stop and transit step between.

Over and beyond the full track and trace capability, BorderGuru’s new integrated solution is delivering many other benefits, including:

Commenting on his experience of managing his first OutSystems project, Tobias said, "OutSystems provides a common visual language that closes the gap between business operations experts and developers. It meant I could get much more deeply involved, and control the development effort better. That’s just what Product Owners need, and I’d say this was the smoothest project that I’ve managed.”

As regards development speed, Tobias says, “What impressed me was not just the faster development speed, but the ability to increase the scope as we went along. Very often, we found pre-built components from the Forge, that we could drop in and integrate without writing code. For example, the camera integration and chat facility that we put in the mobile app were rapid enhancements we added during development.”

HBG now expects to adapt and deploy the TrApp solution for additional high-growth regions in Asia and beyond. Looking ahead, Hermes’ IT organization is taking ownership of the OutSystems apps as a core technology for international operations.