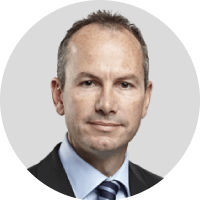 “The speed and simplicity of developing apps and managing code in OutSystems helps us optimize our customers’ operations—and it means we can take full advantage of new opportunities in the growing IoT market.”
Chris Williams, Managing Director, ISB Global

Challenge - Fixed collection schedules create two big problems for waste management firms. When they’re collected, bins are either overflowing onto the street or they’re being picked up empty. Waste management software specialists ISB Global saw an opportunity to fix this problem and change the traditional economics of waste collection.

“Waste management companies are using bin sensors, but the sensors have little or no software integration,” explains Chris Williams, Managing Director at ISB Global. “Companies can’t use the data they collect to increase operational efficiency – and that’s where we come in.”

Everybody Wins: Customers, Managers, and Drivers

Solution - Built in OutSystems by a single developer in just three weeks, the BinLogix app analyzes data from bin sensors to give visibility of the fill-level in each bin and predict when they will need collecting. That means waste management firms can optimize their collection schedules and routes for maximum efficiency—no more turning up to overflowing bins and angry customers or wasting time and money collecting empty bins.

“Development speed is obviously a big part of low-code,” says Chris. “We can build things in low-code around 4-5x faster than in .NET. But the even bigger benefit of OutSystems is how easy it is to manage the code once the app’s up and running.”

As well as integrating with the IoT hardware and SAP order management systems, BinLogix combines with two more OutSystems apps developed by ISB Global. Data analysis from BinLogix feeds into RoutiLogix, which creates an optimized collection route. Drivers are then notified of the updated schedule on a mobile app, DriviLogix, which also lets them give real-time feedback on pickups to accelerate invoicing.

Of course, driver adoption of the system is critical to its success, so the DriviLogix UX is highly visual and very intuitive, featuring bold icons, large buttons, and familiar in-app actions based on the most popular consumer apps.

And it’s not just simpler for users. OutSystems also makes life easier for developers. Chris says: “There’s around a six-month lead time getting new developers up to speed on a .NET app, but with a low-code app like BinLogix, they can understand it in around six hours.”

Results - BinLogix sensors have already been installed at several customers, including 400 street bins in a local authority in Scotland, which will increase to up to 10,000 units over the next five years. ISB Global’s customers report that optimized waste collection schedules are delivering at least a 30% reduction in collections.
“What we’ve done is join up the supply chain,” says Chris. “Our customers can operationalize their IoT data, connecting the field and the back office in real time to uncover new efficiencies.”

With ISB Global’s solutions, local councils can reduce waste collection costs and use the money saved to deliver other vital frontline services. And other organizations with large-scale waste management needs can reduce costs and decrease the risks associated with having heavy goods vehicles on site. Some BinLogix customers are even using the app to right-size their waste environment—optimizing the number and location of bins for even greater efficiency.

One waste management firm is now billing over $100,000 a year more using ISB Global’s OutSystems apps alongside SAP Business One. By capturing the weight of each bin when it’s lifted, the firm can invoice for the actual weight collected, rather than the nominal capacity of the bin.

Thanks to the success of its waste management apps, ISB Global is in talks with more customers about building further IoT apps in OutSystems. “We’re working hard to grow our share of the IoT market,” says Chris. “It’s an exciting time for us as we continue to expand this part of our business, and it’s thanks to the speed, scalability, and simplicity of OutSystems, we’re able to make the most of this opportunity.”

Together with OutSystems, Deloitte built a working prototype of an artificial intelligence (AI) application in one week.