Technical debt has to be both dealt with but also understood and managed if organizations are to deal with the demands for change.

Don't let technical debt set up camp in your organization, say CIOs and business change experts. The interim Chief Digital and Information Officer at the Royal Borough of Kensington and Chelsea, CIO for the European Bank of Reconstruction and Development (EBRD), and KPMG Partner Rui Gonçalves revealed in a CIO Talks debate that technical debt is part of the modern enterprise and therefore requires a strategic approach in much the same way as digital transformation.

"I define technical debt as the sum of the downside of expeditious decisions made over the years," says Richard Williams, CIO for the European Bank of Reconstruction and Development. Lucid Research recently found in a major report that 69% of CIOs believe technical debt limits the ability of their organizations to innovate, and 61% say it is damaging the performance of the business.

Discussing technical debt with Claire Priestley of the Royal Borough of Kensington and Chelsea, a region of London, and Gonçalves of KPMG, Williams added that past decisions are not made for the wrong reasons; they were decisions that had to be made quickly and for business reasons at that time, perhaps during merger and acquisition activities, or more recently in response to the pandemic.

The trio of business technology leaders embraced the analogy that there is an initial need for a tent to shelter from the rain and wind, but that need changes and the tent isn't big enough, and a house is needed and then the house needs extending. Technical debt creeps into the organization in the same way as the need for shelter change.

They said it was important for organizations to be aware that the software being deployed as a tent to shelter from the immediate situation will not be good enough in time, and there will be an additional cost of decommissioning the tent and building a new application to be the house of that business process, which in the last year has grown.

With digital transformation and the pandemic increasing the pace of business, all three said that CIOs are having to increasingly make decisions about what technologies will become a debt in the near future.

"Technical debt is not a technical problem, it is a business problem, and the way that we talk about it becomes highly important," says Priestley. "I like to talk about maintenance, which is a known and understood cost, just like a building, the organization knows that not keeping up with maintenance will lead to risks and further costs, and it is the same with technology, we have an estate, and we have to look after it."

The challenge, says KPMG's Gonçalves, is that it is often hard to demonstrate technical debt in terms of the profit and loss (P&L) of IT and the wider business.

Technical debt has to be dealt with, as failure to do so will lay traps for the business. Lucid Research finds that at least 41% of enterprise IT budgets is consumed in managing technical debt, a trap in itself.

"If you allow technical debt to grow, it becomes part of the complexity trap, and it becomes so overwhelming," Williams says. Adding: "Containing and marshaling that debt, as you go along, becomes what the game of being a CIO is all about."

Returning to the need to make decisions at a certain time, Williams at the European Bank of Reconstruction and Development says CIOs must "keep a decisions and compromises table that says 'I am making this decision and I knowingly incurred these compromises and we understand the financial and support implications of them'".

Priestley agrees: "All of us have to make compromises...so we have to make sure that the management and maintenance of our code, software, and applications is something that is factored into our daily lives or a weekly sprint. And, if it is not, then we are doing something wrong."

Challenged on best practices to deal with technical debt in the way Priestley recommends, Gonçalves at KPMG says: "Low-code can be a strategic platform to provide that flexibility and agility."

Priestley adds that as well as tools, CIOs need to constantly discuss the technical debt with the wider business and senior leaders, with Williams stating that describing technical debt in the language of business risk is highly valuable.

Technical debt is not only a headache for CIOs, but it is the frontline technologists that have to deal with the business and IT disruptions that technical debt causes. "People come to work to do a great job and to feel valued and to fulfill the nature of their role," Priestley says.

"Don't underestimate how carrying technical debt rewires the characteristics of your team," says Williams. "If the team gets into a death march of fixing systems, then that will become a very significant people challenge," the banking CIO says. Gonçalves at KPMG agrees and adds that this is another risk for CIOs: "We must manage our talent carefully, and it is not good to have your talent fixing bugs; you want them where they add value to the business".

"As leaders, we have to find a way to set little brush fires to do things in new ways," Williams says, but he also cautions that as CIOs, it is important to understand the people and their context, as you won't be the first to point out that the number of errors or downtimes is not acceptable. "Be sure to see each other's challenges," he says.

Gonçalves says that leaders need to implement controls so that risks are understood and managed, which Williams agrees with and adds that if a risk is accepted, then the business knows that provision has to be made to deal with the continued technical debt at a later date, "because it will break".

Whether from the demand for digital transformation or a pandemic, CIOs are under pressure to deliver more applications at a faster pace than ever before. This is building more technical debt into the business, but can CIOs deliver at the pace the business demands and without leaving a debt?

"The question of the right pace is within our gift," says Priestley. "I work with colleagues that are incredibly proud of the elegance of the code they write, and there is nothing better than seeing them swell with pride when a comment is passed about the quality of their code. Building it right is not impossible. Building at the pace is not impossible. Navigating the path between the two and managing the expectations of your stakeholders is where it gets sticky."

"Building perfect elegant code is great, but we have demands from the business to meet, and this is where compromises get made at the macro and micro level," says Williams. "So we have to train and empower our people, so they are the gatekeepers to the process and get them to understand the business and to look at the code and infrastructure with that in mind. We then set the guard rails of what is an acceptable risk and let these brilliant people make the decisions."

The financial services CIO says the role of the CIO then is to create a culture where the team members deploying technology and dealing with technical debt realize when a compromise needs to be made, and seek the CIO out for help in judging the risks and levels of compromise.

Technical debt, like digital transformation, is a continuum, just as the demands on a property change and the building has to be altered. As organizations across the world reconfigure their offices and factories, as we change our homes due to new family needs, so the technology deployed will change, and what was a wonderful temporary technology last year, will need to be rebuilt as a bigger and more effective technology next year.

Change is not without cost, but that cost can be managed.

Watch the whole conversation about how these IT leaders are managing their technical debt in How CIOs Can Pay Off Tech Debt and Invest in the Future. 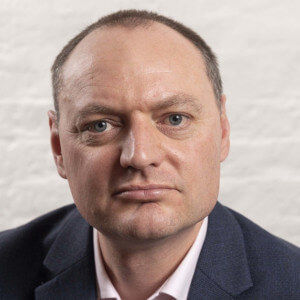 Mark Chillingworth has been observing, speaking, writing about and hosting chief information officers (CIO) community events and podcasts since January 2008. Today Chillingworth works as a writer, editor and moderator for leading publications, including Diginomica, the Financial Times, HotTopics, iCIO, IDG Connect. Away from the world of CIOs and CTOs, Chillingworth is father to two daughters and is obsessed with mountain biking in France or the North Downs.

Build vs. Buy in a Fast-Changing World