OutSystems, the enterprise Rapid Application Delivery (RAD) platform provider, today announced that it has been positioned in the Gartner 2015 Magic Quadrant for Enterprise Application Platform as a Service. 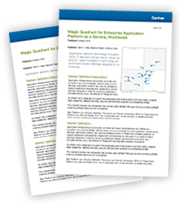 The recognition comes on the heels of an outstanding year for OutSystems. The company delivered record revenue in 2014, growing worldwide software subscriptions at a 45 percent compound annual growth rate (CAGR) between 2012 and 2014. Worldwide, OutSystems added 140 enterprise customers during the year, including over 10 Fortune 100 companies.

With over 130 partners worldwide, OutSystems has seen an uptake in leading systems integrators adopting the Platform. Today, over 74,000 applications have been built and deployed using OutSystems Platform and over seven million end users leverage apps built using OutSystems.

In 2014, enterprises in 22 industries in 25 countries increasingly selected OutSystems to help them build enterprise-class mobile and web applications in a fraction of the time of traditional development. Organizations in the advertising/media, banking, business services, chemical/agriculture, consumer, education, engineering, financial services, government, healthcare, manufacturing, pharmaceutical, retail, technology, telecommunications, transportation and travel and leisure industries all selected OutSystems to reduce their time-to-market and manage applications seamlessly across the software development lifecycle.

“A record number of companies across the globe rely on OutSystems to quickly deliver applications that are transforming the way they interact with their customers, partners and employees,” said Paulo Rosado, CEO of OutSystems. “We believe this latest recognition by Gartner is further proof that our approach is resonating with the market. We feel it echoes what we see from customers, who are increasingly feeling the pressure to change the way they think about IT and application development, to keep up with business needs, and as a result, are adopting OutSystems in record numbers.”

OutSystems Platform enables any developer to rapidly deliver mobile and web apps with unprecedented speed from a single application design and code base. OutSystems applications are created and deployed as open, standard-architecture code and insulate enterprises from future technology changes and vendor lock-in.