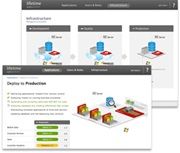 OutSystems Platform 7.0.1 provides IT teams and developers with:

- OutSystems Platform 7.0.1’s enhanced deployment algorithm allows for a massive reduction in the storage needed for large, complex applications. Beta customers with large software factories that have a high number of reusable components are reporting a more than 90 percent reduction in storage requirements.

- This new deployment algorithm also greatly improves the ability to automatically deploy to multiple front-ends in parallel. The result is a 30 percent reduction in time to deploy applications to large production farm environments.

- Development and Operations teams can now perform the more time-consuming steps of an application deployment, like impact analysis, compilation, database scripts generation and file distribution, in the first stage without impacting running applications.

- On the actual go-live date, IT teams can finish the One-Click Publish process in a very short amount of time (just a few minutes, even in large software factories), while making sure all applications built with OutSystems Platform keep running without downtime.

- SQL Server 2012 support is included in OutSystems Platform 7.0.1, ensuring that customers can keep their applications compatible with the latest DBMS release with minimal effort.

The Growing Threat of Technical Debt

Technical debt costs businesses thousands of dollars a second, and even worse, it ties up resources that could have been invested in innovation.

In this evaluation guide, we present the pros and cons of PWAs, alongside how the OutSystems app development platform can help. By the end of this guide, you'll be ready to decide which route to take for your next mobile project.