How does OutSystems handle deployment and staging?

With OutSystems, deploying a complex app to production is simple and doesn't require specialized skill sets (scripting or maven experts). It offers automated staging across environments with full dependency analysis, no downtime and automated rollback capabilities. It also offers governance and separation of duties by managing the roles, permissions and security policies for all environments. OutSystems version control system allows tagging and hotfix detection.

In addition, OutSystems offers APIs to manage deployments and to govern users, such as adding deployment privileges to a developer during a SOX-compliant deployment process.

Configuring a deployment package of an OutSystems application is shown in this example: 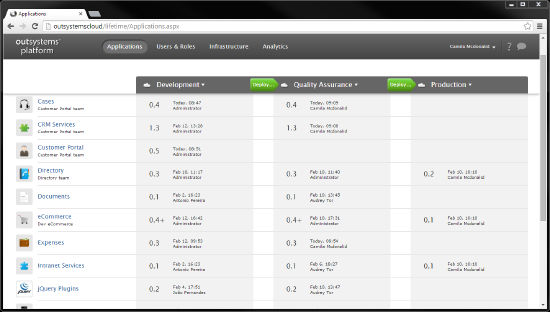 Upon the request to deploy, an impact analysis is executed to validate if the deployment can be performed without affecting other applications running in the target environment. If it cannot, OutSystems prevents the deployment from moving forward until conflicts and dependencies are resolved.

OutSystems then provides feedback to the deployment requestor, so an informed decision can be made on which action to take to resolve as shown here: 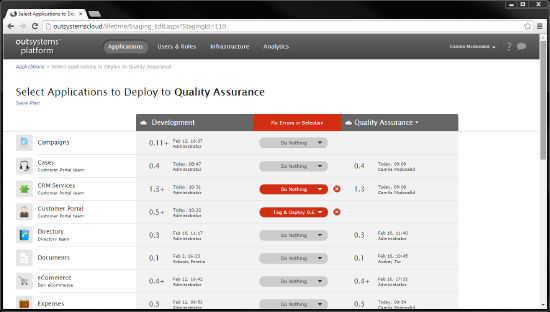 When no dependencies exist and the impact analysis is valid, the user can confirm the deployment or redeployment of applications. From this point forward, the automated deployment is started and it automatically executes all the tasks necessary to:

All these tasks are automatically executed and monitored without the need for manual intervention from the operations team, accelerating delivery and minimizing risks in deployments: 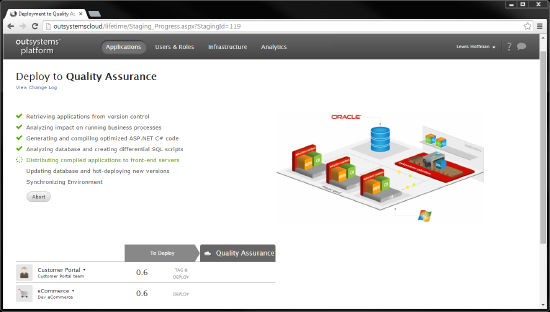 Zero downtime deployment of apps across the server farm

This advanced deployment process is centrally controlled by the OutSystems Platform Server. During the deployment of a new version of an application, the new version of the web application logic is deployed to a protected area in all front-end nodes and made available to end-users simultaneously and together with the data model updates.

OutSystems supports security governance for user (development and operations) management with security rules to define access levels to specific apps, services or APIs, and privileges for environments. A typical DevOps example would be a developer who is taking code to production or preparing the deployment plan so the Ops could finish it. Still, everything automated, but under control. 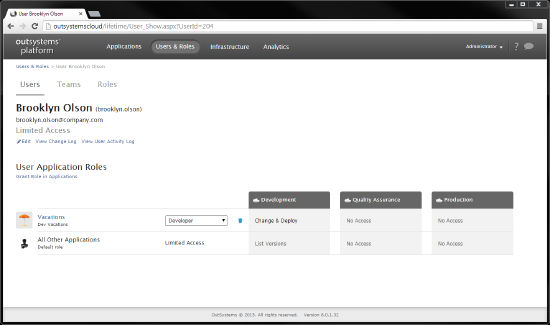 In this example, a user is planning the deployment for execution by the operations team: 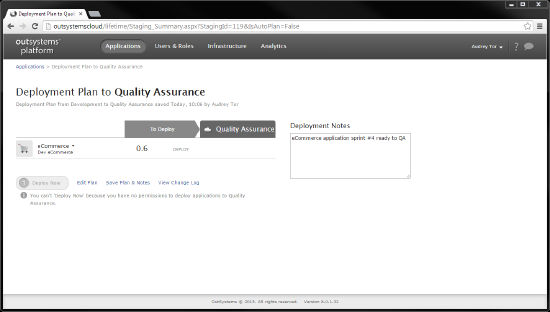 OutSystems offers an integrated version control system that enables users to take a snapshot of the application and its modules, tag it with a version, and then use it for deploying throughout the multiple environments.

Tagging a version for the Campaigns application is shown here: 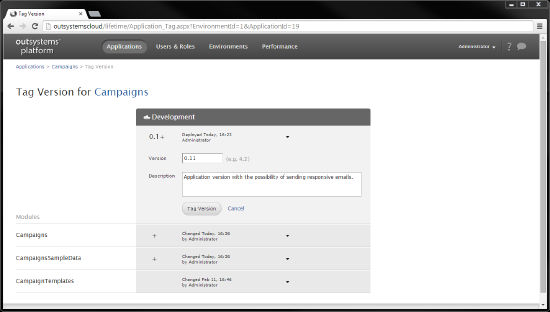 Deploying a tagged version is shown in this example: 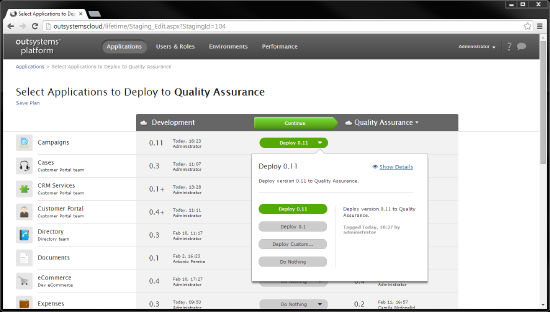 To learn more about version control, read this article.

OutSystems includes APIs to integrate the deployment of OutSystems applications with your existing DevOps tools and processes.