Redington Gulf, an IT distributor with a multi-billion-dollar turnover, wanted to modernize its complex, manual approach to rebate program management. With no fast or cost-effective way to change its core systems, it decided to build around them, using OutSystems to create an RPA-assisted app in just three weeks. The new app has already increased the efficiency and accuracy with which the team inputs data, delighting users—and providing a proven template for future process reengineering. 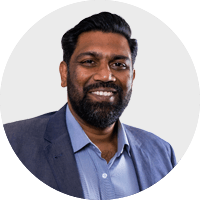 “With OutSystems, we can give users a modern, comprehensive, mobile UI, whatever they’re doing—while keeping our back-end systems simple and easy to maintain.”
Sunil D’Souza, Chief Technology Officer, Redington Gulf

A Remarkable Business, A Universal Challenge

Challenge - Redington Gulf distributes leading technology brands across the Middle East and Africa. Like many businesses, hard to change packaged software had led to several laborious manual processes because changes to standard ERP software would take too long.

As Sunil D’Souza, Chief Technology Officer explains, “Back in 2006, we decided to unify our entire business on a single platform, SAP.” Despite the advantages this brought, D’Souza and his team found that, as their needs evolved, giving everyone access to the information they required was becoming a struggle. Customization took a lot of time and resources—and made subsequent upgrades harder.

One case in point was the company’s rebate management program. Redington’s business model depends on selling technology for more than the price paid. That might sound simple, but constant innovation by manufacturers can often lead to price drops that make existing stock impossible for distributors to sell at a profit.

To solve this, manufacturers provide rebate programs, whereby distributors can earn rebates for selling specific products to qualifying customers. But managing rebates was extremely hard for Redington, as it dealt with hundreds of manufacturers, and rebates were continually changing.

With limited ability to customize its core systems, Redington was relying on a team of 11 FTEs—and error-prone manual data entry—to keep track of the many programs active at any given time.

Solution - In 2016, Redington went on the hunt for a rapid application development platform.“We decided to find a system that would work with SAP to achieve the modern workflows we wanted,” says D’Souza. After a successful proof of concept using the company’s SAP data, Redington invested in OutSystems. The first significant test of its new approach? Overhauling rebate program management.

OEMs share rebate program details as PDFs, by email, EDI, or through a portal. Traditionally, the rebate program management team would have to manually extract the data from these PDFs and put it into Excel sheets, updating these whenever the program changed (some programs could run to 120 versions in just 90 days).

Combining OutSystems with RPA, Redington’s developers built an app to transform this process, reaching first adoption in just three weeks—rather than the eight weeks it would have taken even to reach first release using traditional tools. Now, RPA reads the OEMs’ emails and PDFs and puts the data into the Excel sheets. OutSystems holds the business logic, validating the data and presenting it through a modern, mobile-friendly UI.

Results - At the time of writing, Redington is using its new app to manage rebate programs from its top four OEMs. This has already reduced the time its rebate management team spends on data input by a third. As Redington migrates the rest of its rebate programs, it anticipates even more dramatic time savings. As D’Souza says, “Over the next couple of quarters, we expect to spend less and less time and effort on data input.”

The app has also transformed data accuracy, empowering Redington to resolve any discrepancies between its records and its OEMs’. At the same time, it’s boosted operational transparency. For example, through its integration with SAP, the app can alert the business team if they’re about to sell more units than a rebate program allows—preventing a loss-making sale before it happens.

Another key benefit has been the power to re-engineer processes to drive end-to-end efficiency. Rebate managers can now see all key program details and create and manage vendor credit notes, from a single dashboard, on any device.

Redington’s development team is happy, too. Despite initial concerns about shifting away from a .NET approach, they’ve rapidly adapted to low-code. As Srinivasan CR, General Manager, BTIS explains, “We have two developers certified on OutSystems, and another three working on OutSystems projects. If I were to tell them, ‘That’s it, you have to use .NET again,’ I don’t think any of them would.”

The company is now keen to use its success with the rebate program management app as a template for future process optimization. “With OutSystems, we can transform business processes while keeping our core systems simple,” says D’Souza. “And everyone’s blown away by how fast we’re now able to move.”

ISB Global spotted an opportunity to bring new efficiency to its waste management customers’ operations by making better use of the data from IoT devices.

MMSG is innovating at speed to keep Australia’s largest provider of salary packaging and novated leasing services ahead of the market for customer experience.