Named one of the fastest growing companies in America by Inc. Magazine for 2011 and 2012, JTC Americas, formerly NES Financial, set the standard for third-party administration of complex escrow and fund administration transactions. The development of the company’s initial eSTAC platform, which automated many labor-intensive spreadsheet tasks, allowed the company to scale very quickly, accelerating its early growth.

But, as the number of clients grew, so did the demands on IT. Their search for a new development platform to help them be more responsive to customer needs through faster, iterative updates, while reducing a growing backlog, led them to OutSystems. This is their story.

Silicon Valley-based JTC Americas has been a leader in 1031 exchanges, EB-5, and fund administration since its founding in 2005. Theirs is a complex business and one that customers rely on to remain compliant with U.S. tax and immigration laws.

JTC Americas is a pioneer in its field, initially helping to create processes and transparency where little existed. As its investor-heavy customer base grew from hundreds to thousands, the company had challenges with scaling its manual activities around documentation and administration.

Facing a long-term scenario that consistently increased headcount primarily due to manual processes, thereby driving up the costs of its services, JTC Americas turned to technology to help solve its scalability woes. 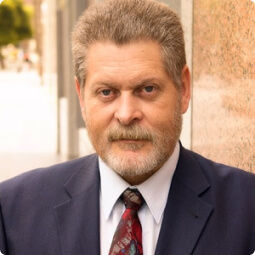 Before OutSystems, the company’s original technology stack was based on Microsoft’s .NET framework and included:

But as the company continued its uncharted growth and as the demand on IT increased for more robust systems to accommodate the need for more and better data, the existing systems’ limitations became more pronounced.

“We had a lot of challenges to address when we started looking for alternatives to how we were maintaining our existing systems and addressing the needs of our customers moving forward,“ said CTO, Izak Joubert. “We had pockets of systems that worked well for us that we didn’t want to get rid of, so integration was critical. We have a solid team of developers with a deep background in C# and ASP.NET, but we were spending far too much time on tedium. I needed to standardize on a platform that would help us all generate multipliers of efficiency and produce quality code that was predictable and repeatable.”

For CTO Izak Joubert, it wasn’t a matter of “If” he should consider replatforming but when and how.

Before discovering OutSystems, Joubert and his team spent more than a year developing a new platform from an existing CRM using Java and running on MySQL.

“The results were disappointing,” said Joubert. “Functionally, and from a performance standpoint, it just didn’t meet our expectations, and it disrupted the entire development organization.”

Recognizing that another pivot so quickly could jeopardize upcoming milestones, Joubert’s team returned to business-as-usual and managed to deliver a new version of their core platform. But, previous problems remained. Armed with additional insight into available technology options, and vowing not to make the same mistake twice, Joubert launched an exhaustive search for a new solution.

Izak said, “I had some very specific ‘must haves,’ which included a solution that rendered compiled code, not just runtime code. Runtime code is an issue for auditors because it is very difficult to prove to them that the code you are running in your live environment is the code that you built.”

After six months of evaluating 10 vendor solutions, in the end, OutSystems checked all the boxes:

Starting with a trial license of OutSystems, Joubert and his team got up-to-speed with visual development using OutSystems online training courses and received a little help on-site from an OutSystems engineer.

Since implementing OutSystems, JTC Americas has delivered on its initial back-office scope of work and more. They have added 50 percent more functionality to their platform. They have replaced several legacy spreadsheets with a new solution that simplifies data entry on the front-end. And, they have significantly improved back-end tracking and reporting processes. And all in just four short months. 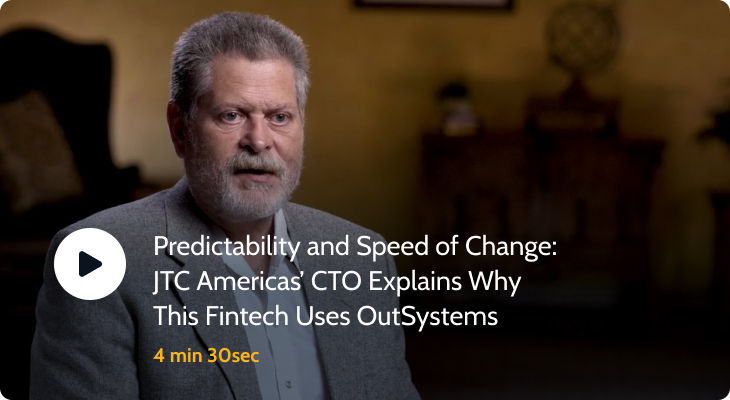 With OutSystems, they have been able to:

Working with OutSystems to deliver process digitalization in the cloud, GarantiBank improved efficiency in just 6 months.