Recent research paints a conflicting picture of manufacturers’ adoption of artificial intelligence. António Alegria, Head of the OutSystems research lab, outsystems.ai, was interviewed by “The Manufacturer” to explore what lessons manufacturers might learn from the realm of software development.

This Interview was originally published in TheManufacturer.com

“The future is already here—it's just not very evenly distributed.”

You don’t need to be a science fiction aficionado or cyberpunk to have heard this saying before. But, if ever there was a topic for which these words act as a fitting introduction, then surely artificial intelligence is the one.

I say that because research recently published by Deloitte on the state of AI in the enterprise says, “early adopters of AI are ramping up their investments, launching more initiatives, and getting either moderate or substantial benefits.” Then, on the other hand, the same report admits, “some organizations struggle to articulate a business case or define success for AI.”

In the race for digital supremacy, manufacturers that fall behind industry peers will quickly become uncompetitive, especially as the Deloitte report singles out the manufacturing sector as capable of getting high returns from lower than average investment in AI.

Meanwhile, McKinsey says the global manufacturing and supply chain sector could reap as much as a $2 trillion annual benefit from AI, with over a third of that coming from improvements to predictive maintenance alone.

Can Manufacturers Learn From Software Companies?

In a previous conversation with António Alegria, The Manufacturer explored how low-code development platforms like OutSystems can help businesses accelerate innovation by enabling fast digital experiments, without the technical hurdles and delays usually associated with IT projects.

In this conversation, we delve deeper into artificial intelligence. However, the first question to António was: Why do manufacturers need to focus on software development at all?

Antonio Alegria (AA): As Forrester Research once said, “Today, every company is in the software business,” and if you think about manufacturing, that rings particularly true. Increasingly, products have a digital component. Take cars for example. Today you can’t get a car serviced or repaired without, first of all, connecting it up to a diagnostics reader and interrogating the onboard computer. Modern cars typically have multiple software programs that monitor performance or control fuel injection, automatic transmission, braking, and much more.

Production lines also have many digitally-enabled machines, providing factory managers vast amounts of data on how things are running. This can mean the difference between planned preventative maintenance and unplanned outages that badly affect productivity.

Lastly, think of the jet engine as a service business model, where instead of making capital purchases, customers rent equipment and pay a cost per mile. In that situation, the provider needs to keep track of the engine’s utilization and performance data, not just for billing, but to ensure that the asset keeps working at optimum performance.

All of these use cases require software. Without software, there would be no data and no way of exploiting it.

TM: So, there is potentially vastly more data available to manufacturers. Does that automatically lead us towards needing AI?

AA: Not necessarily; in some cases, standard data analytics could be enough. However, AI takes things a step further, as the software makes an intelligent decision in a specific situation, based on previous training. This brings us back to the need for data, as that training process requires a large, high-quality dataset.

TM: Can you give us an example from the manufacturing world?

AA: A good example is image processing. Take a production line making electronic circuit boards, for example. Every circuit board is photographed as it passes down the production line. Images are passed to an AI agent, which has been trained using millions of photographs, to identify any defect on the circuit board. Even microscopic cracks in the solder that are invisible to the human eye can be spotted. We call that training “deep learning.”

The AI agent identifies faulty circuit boards and sends the necessary instruction to the production line to divert defective items to disposal or inspection.

TM: How does that compare to the world of software development?

AA: Actually, the same process is used commonly in testing and quality assurance. AI agents have been trained to recognize unsafe programming code so that cybersecurity vulnerabilities are flagged for remediation before software goes into production.

TM: Is that the kind of thing OutSystems AI initiative is focussed on?

AA: In our view, prevention is better than cure, so, we’re doing things differently at OutSystems. Firstly, as OutSystems is a low-code development platform, developers don’t hand-write thousands of lines of code. Instead, they use a faster and simpler visual modeling approach. The visual models are translated automatically into highly optimized and secure code.

That way security is handled automatically during the development phase, rather than being something left to test later on.

In this way, we were able to identify common, best-practice model patterns. The result is an AI assistant that acts as a wingman, guiding developers with next best step suggestions as they visually model their application.

We have had great feedback from users. Experienced developers are 25 percent faster. New developers who are less experienced with OutSystems find the platform even easier and quicker to learn.

When you consider that low-code development already has a four- to ten-fold speed advantage compared to hand-coding, it’s all the more impressive that AI is delivering a further speed advantage.

TM: Why should manufacturers consider low-code development if they’re investigating opportunities for AI in their business?

AA: From my point of view, there are three main reasons: faster development, easier development, and access to a wide range of AI connectors. Here’s why these things are important.

Faster development: At first glance, the benefit of faster development is obvious—faster time to market, earlier benefits, better return on investment, and a competitive advantage.

But, suppose like many businesses you’re uncertain of your AI business case. You might have a hypothesis, but there’s no guarantee that your initiative will pay back. If that’s your situation, getting support and budget for IT development will be hard.

In these circumstances, speed is tremendously important and allows the kind of lean start-up, test, and learn approach we spoke about in our previous conversation. With low-code, you can deliver in days or weeks what would take months with traditional coding.

Easier development: According to our research, nearly 60 percent of manufacturing businesses have an application development queue, and only 38 percent say the picture has improved in the past year.

That’s pretty discouraging of experimentation, as there are umpteen other priorities for which IT has a solid business case. So, engineering technologists may need to step up to the plate and get involved in application development themselves.

The ideal scenario is that IT invests in a low-code application development platform, then co-opts business or engineering folk into high-speed co-creative development projects. That way you can get experiments off the ground even faster by eliminating exhaustive analysis of requirements before the business can hand-over something to IT.

AI connectors: One of the things that is fuelling adoption of AI is the way that cloud provisioning lowers the technology barriers for small and medium-sized companies to get started. Most low-code platforms excel at connecting to other systems, whether inside your business or across the cloud.

So, despite the speed and ease of use advantages, there should be no reason why low-code would restrict your options to exploit the market-leading technologies for AI to accelerate your firm’s innovation. 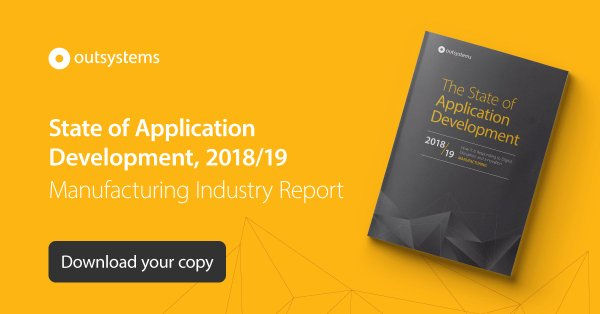 According to our research, manufacturing businesses face numerous challenges that slow or delay digital innovation.

If your IoT, digital manufacturing, or other transformation efforts seem to be stuck in lengthening IT queues, you are not alone: 57% of manufacturing businesses have application development backlogs, and only 38% say they’re improving.

Want to find out more about how manufacturers are performing on a wide number of app dev performance measures?

Download your free copy of our manufacturing industry report

How Is Low-Code Helping to Fuel Manufacturers’ Growth Ambitions?

4 Examples of Legacy Systems (And How to Modernize Them)