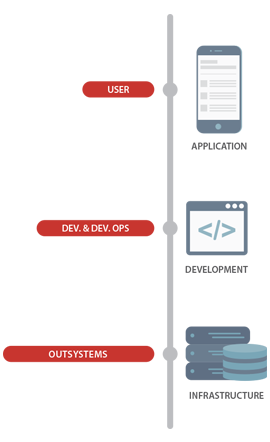 The information below applies to OutSystems 11 and to the 2020 pricing model.

Delivery of this service requires direct assistance from OutSystems Support.

When a customer upgrades its subscription to OutSystems Sentry, OutSystems will make the necessary infrastructure upgrades. 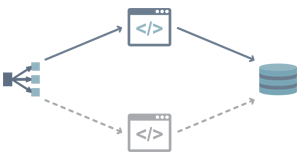 Up to 5 business days

In either case, customers should submit a reasoned request to OutSystems support, which will respond according to the request priority and respective SLAs.

For horizontal scaling requests, the new front-end server is created and added to the load balancer automatically, becoming immediately available after provisioning ends.

For vertical scaling of front-end servers or databases, upon customer request, OutSystems will propose a schedule for the upgrade, subject to customer confirmation.

For environments with only one front-end, the front-end scale-up operation causes a downtime of approximately 30 minutes.

For production environments with two or more front-ends, the front-end scale-up causes a reduction of processing capacity, but there is no downtime. All front-ends are scaled up to the same server class.

With OutSystems Cloud, automatic backups of the production environment database run daily and are maintained for 15 days. OutSystems Cloud databases can be restored from existing backups (automatic or ad-hoc), or to a specific point-in-time in the last 15 days.

Daily backups of the production database are executed automatically, with no downtime. Backups are stored in multiple data centers within the same AWS Region of the OutSystems environment. To further minimize performance impact, the backups are executed 3 hours before the defined maintenance window to avoid any impact on the scheduled activities, in the time zone of the AWS Region of the environment. 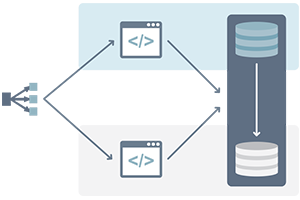 Database replication is automatically activated for the Production environment(s) as customers subscribe to the Enterprise Edition or to the High-Availability add-on of the Standard edition.

By default, new environments are created in the same Region.

To connect to other resources on AWS, customers can attach the OutSystems Cloud VPC to the AWS Transit Gateway.

These connectivity options are available on Standard and Enterprise editions.

To establish a VPN connection to the OutSystems Cloud customers need a VPN gateway with the ability to initiate a VPN tunnel. The setup of the VPN is executed in self-service in OutSystems Lifetime.

Additional VPN connections can be added, up to a total of 5.

Direct database access is available for the Standard and Enterprise editions.

Customers can request direct access to the OutSystems Cloud Database a Service layer, using either temporary or permanent database users.

Temporary database users can be obtained in self-service, via Lifetime.

For permanent database users, customers send the the request specifying a range of IP addresses entitled to such access. Within 5 business days, OutSystems will provision one database user account and provide the credentials to the customer.