If you’re a developer, you might be familiar with this drama. It’s a day like any other. You wake up to go to work, as always, ready to hit that C# and PHP code, then your boss tells you that there’s a new project coming up and you need to learn new technology. You’re a developer, so you enjoy the challenge of learning a new language, no biggie. Then your boss tells you, “You’ll be using a low-code platform from now on.” You mean visual development? The pain, the agony, the suffering. That’s sort of how my story goes.

A Quest For Flexibility

I’ve been a systems and network administrator for almost five years at a company called Kings III. If you don’t know us, we’re an elevator and pool emergency help phone solution provider. Do you know those emergency buttons in elevators you hope you’ll never have to use? We’re the ones who install them.

A couple of years ago, we decided to automate our sales process. Before then, we had a team of three people who took all the information from sales, printed it out, and then typed it into a program that was integrated with our financial and billing platform. This process took about 15 to 20 minutes, which is a lifetime in sales. So, my company decided it was time to build a new workflow automation tool to smooth the process and speed things along.

At the time, our only developer had just left the company, and I saw my opportunity to go back to coding. But I wanted to do things differently. Before, the developer would go off and develop for a few months and then show the product to the stakeholders. Then they’d say, “Oh, no, we need to change all of this.” So off the developer went for a few more months to redo it all, and then the story repeats itself. Sound familiar? That’s why we wanted something different.

We knew our business processes could change every couple of months, and we could have a new process to handle, so we needed more flexibility. I started looking for traditional coding solutions for this workflow automation project, evaluating whatever I could find that allowed the most flexibility, and I ended up stumbling upon low-code. I know what you’re thinking; I thought the same thing.

When I took low-code for a test drive, I immediately began questioning myself. Was I going to lose control over the source code? Was visual programming even real programming? Was I really a developer, and did I make the right decision? Or should I be writing code? It took me about six months of working with OutSystems to get over that feeling.

It was a slow process, but over time, the benefits of being able to develop visually began to show. I was able to see my code layout and how it was working—instead of staring at thousands of lines of code.

The greatest thing about low-code is that it allows me to rapidly make changes. When someone comes to me and says, “Hey, this is broken,” I can quickly debug it, find the problem, fix it, and upload it in LifeTime (that’s the OutSystems management console). In OutSystems, you’re in control of how the code looks visually, and all the debugging is done behind the scenes. So, you only have to test it and then deploy it back to production. You can do this in five minutes with no user downtime. That’s pretty life-changing compared to searching for errors in lines of code.

Plus, we’re a small company, so everybody at Kings III is busy. We don’t have time to constantly do quality testing. With OutSystems, the ability to rapidly make and deploy changes almost makes testing unnecessary. I do my quality testing, of course, but if I miss a few things, it’s not a big deal.

Another great winning point for me was the understanding that you’re not really limited. OutSystems lets you do .NET extensions to add code when needed.  I can do any type of development I want and build creative solutions that allow me to use application objects in more meaningful ways.

With OutSystems, we didn’t have to hire another developer. I could just do it myself, and it ended up being four times cheaper than hiring new resources. This return on investment helped curb any concerns, as do the apps I’ve built so far.

Since adopting OutSystems, I’ve built a workflow automation sales tool that turned a 20-minute task into a 2-minute one. The app takes data from our CRM platform, processes it, doublechecks it, and validates it. Then, two people just go through it quickly to make sure there are no errors. This takes less than a minute, and the data is ready to submit.

I’ve also built another app called Customer Lookup Tool that merges all the information coming from two different applications used by our finance team so that all customer data is in one place. And I’m now working on a field services app for our service techs. These apps translate into real business outcomes. They save our employees time, which means we also save money and gain more efficiency for greater profits. Although I’m a developer, I understand that.

Building a Career With Low-Code

The more I develop with OutSystems low-code, the more potential I’m seeing for the future. Can a developer build a career using OutSystems? Yes. If you’re raising an eyebrow, just look at it this way. With low-code, you can build something really cool, but instead of slaving away for hours writing code, you can do it in half the time. Then you can use your extra time to make your project even cooler or move on to other projects.

That’s what I’ve done. Aside from the apps developed in OutSystems, I’ve got a project that is focused more on hardware product development, which requires hard-coding. And I’m still the only developer in the company. So the fact that I have OutSystems means I  can take on different projects and deliver them on time and with quality and still have room for other work.

The bottom line: Low-code makes your life a lot easier and delivers real business value for your company, too. 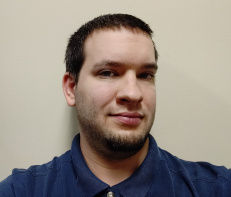 For more than eight years, Casey Preuss managed the IT infrastructure for leading 24/7 emergency operations. Now, with the power of low-code from OutSystems, he has turned to development to improve business processes and design and develop internal mobile and web applications for a leading emergency communication services provider.