We're also committed to making sure developers aren't limited in any way. Therefore, OutSystems allows developers to use standard HTML, Javascript, and CSS and extend their applications as needed.

In summary, the visual editor is very similar to a view templating system, such as .NET ASPX, Java JSP or Ruby ERBs, where users define the HTML and include dynamic model/presenter bound expressions.

OutSystems provides a very simple to use AJAX mechanism. However, developers can also use JavaScript extensively to customize how users interact with their applications, to create client side custom validations and dynamic behaviors, or even to create custom, very specific, AJAX interactions. For example, each application can have an application-wide defined JavaScript file or set of files included in resources. Page-specific JavaScript can also be defined.

OutSystems includes jQuery by default in all applications. But, developers also have the option to include their own JavaScript frameworks (prototype, jQuery, jQueryUI, dojo) and use them throughout applications just as they would in any HTML page.

Many JavaScript-based widgets, such as jQuery plugins, have already been packaged into easy to reuse web blocks by OutSystems Community members and published to OutSystems Forge. There are examples for kParallax, Drag and Drop lists, Table freeze cells, Touch Drag and Drop, Sliders, intro.js, or the well known Google Maps.

Even some of the OutSystems built-in widgets are a mix of JavaScript, JSON and back-end logic. For example, the OutSystems Charting widget is a wrapper over the well-known Highcharts library. Developers can use the properties exposed by the OutSystems widget, or use the full JSON API provided by HighCharts to configure the widget.

More experienced developers can even wrap custom JavaScript plugins in web blocks that the rest of the team can easily use in all applications.

This is an example of the jVectorMap JavaScript library, wrapped and reused in the visual designer to display website access metrics over a world map: 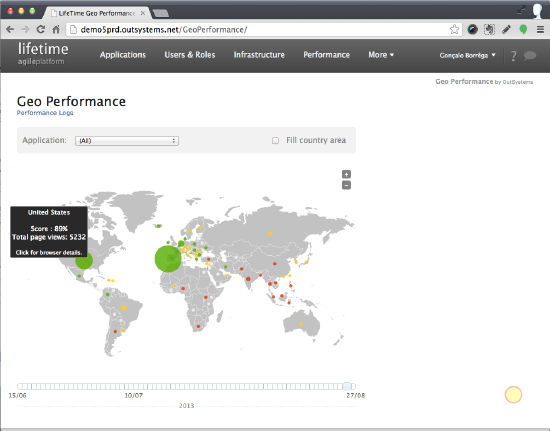 This is an example of a jquery slideshow plugin wrapped and reused in the visual designer: 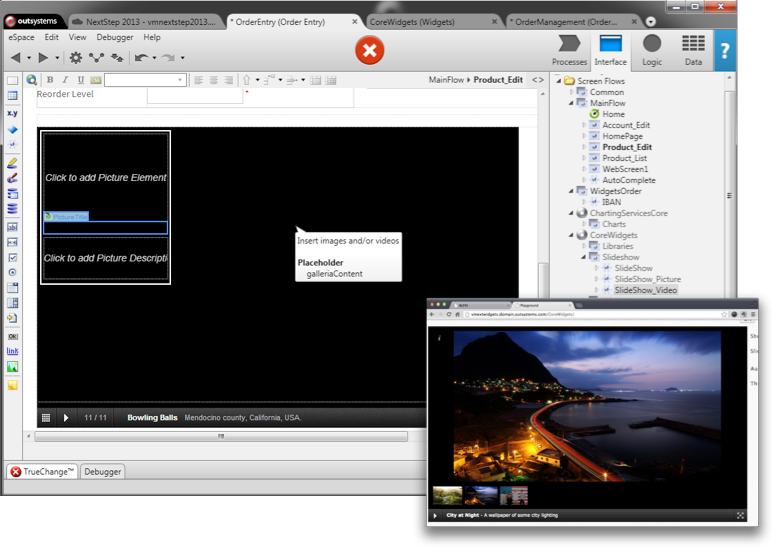 OutSystem UIs are purely CSS3-based. A predefined set of “themes,” a mix of CSS and layout templates, can be used in applications. However, developers can reuse existing CSS or create their own. A common example is to reuse bootstrap, which is tweaked so that its grid system is reused by the OutSystems visual editor to drag and drop page layouts, instead of having to manually input the CSS columns for every element.

Themes are hierarchical, which means that there is a CSS hierarchy in OutSystems. Developers can define an application-wide CSS in one theme and redefine only parts of it for a particular section of an application. Themes can also be reused by applications when there is a standard style guide.

The built-in CSS text editor supports autocomplete, similar to that of Firebug or Chrome Inspector, and immediately previews the results in the page without having to recompile/redeploy applications.

Common CSS styling properties including padding, margin, color, border, and shadow, can also be adjusted from directly within the IDE using the visual styles editor panel.

Examples of extending the UI

A great example of UI extensibility is Pordata. The Pordata website is the most important statistics website in Europe and is fully implemented with OutSystems technology. This website makes a large amount of statistical information about Europe available. The OutSystems UI extensibility capabilities were used for the graphical representation of data in charts, dynamic charts and geographical information visualization. 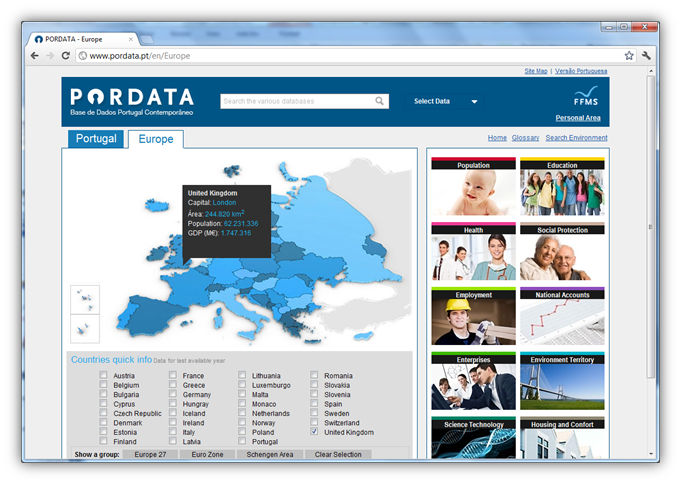 This is an example of a typical page in the website that provides the visualization of information in dynamic and static charts: 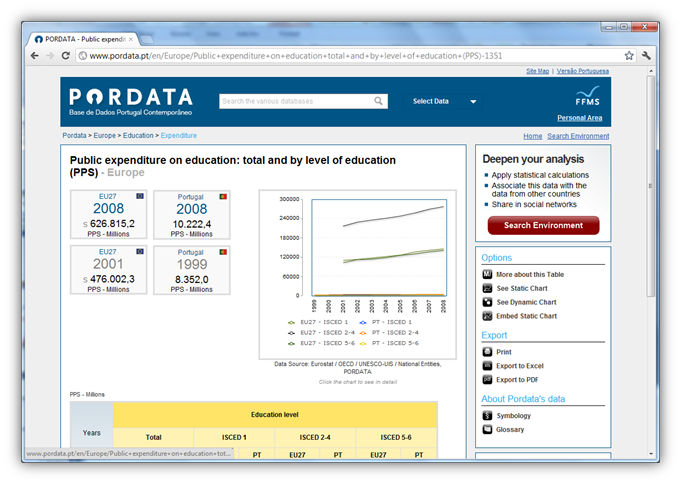 Wodify, a SaaS solution for Cross Fit Gyms, is built with OutSystems and currently supports more than 200,000 users around the globe. Although most of the functionality in Wodify is created with OutSystems built-in user interface widgets, it is a great example of how OutSystems interfaces can be freely styled using CSS to achieve a consistent look and feel and support several devices and form factors. 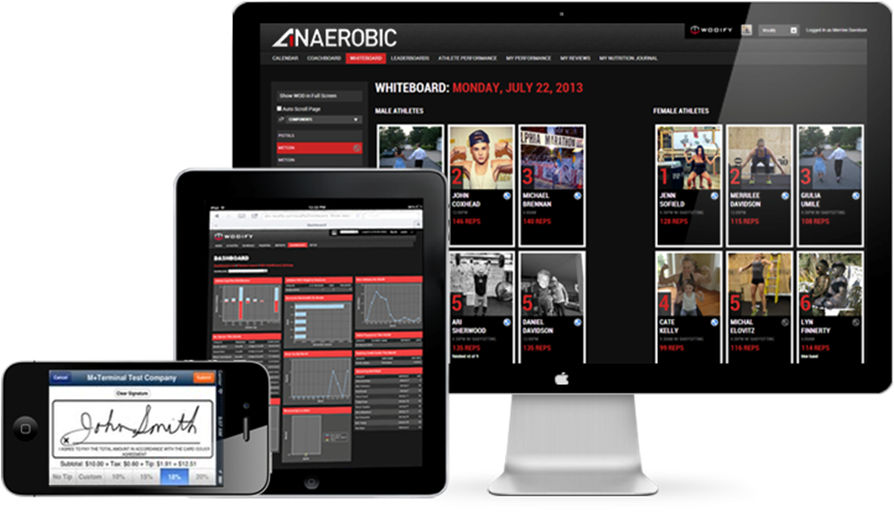 This is an example of dashboards for the gyms: 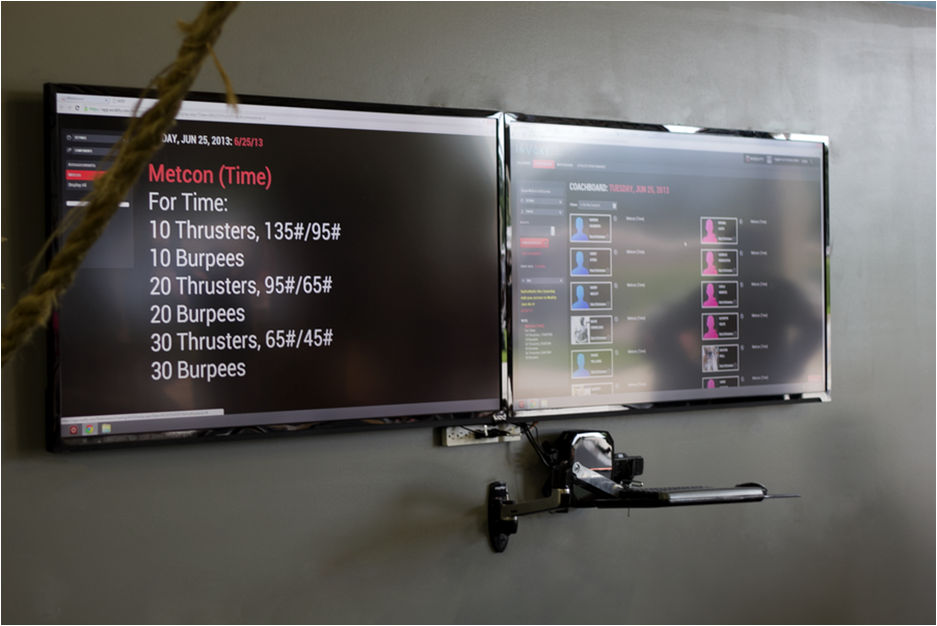