For BRI Security and its largest client, processing the volume of handwritten reports produced by its field operatives was becoming impossible. To solve the problem, they chose to pioneer tech-infused security operations. The company used OutSystems to rapidly build a new mobile app called BOSS, streamlining reporting for its guards, back-office, and clients. Along with solving their information processing issues, the app has empowered BRI Security to offer new data-driven services, customize operations, and differentiate themselves in a competitive market.

Up to 5x faster than a traditional development approach 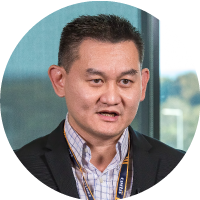 "The OutSystems low-code platform allows us to be very nimble. It lets us rapidly tailor our technology-infused operations to our clients’ specific needs. And that’s the source of our magic."
Ying Loong Lee, Technology Director, BRI Security

Getting Smart About Security Services

Challenge - Security guards need to record a wealth of data in the field, from the incidents they’ve witnessed to the breaks they’ve taken. But manually processing their paper reports can lead to errors and takes too much time, making improving performance—and optimizing service delivery—a genuine struggle.

As a trusted security services company in Australia, BRI Security understood this struggle only too well. Its resources and those of its biggest client were operating at capacity simply to process the paper reports its guards were creating.

Going mobile and digital was the natural solution, but with no developers in-house, BRI Security was dependent on rigid, subscription-based IT. The purpose-built, customized app it needed seemed out of reach.

Solution - Enter Ying Loong Lee, a technology director who arrived at BRI Security from its parent company, Certis, had a simple mission: bring more value to its clients. His goal was to create tech-infused operations that would improve customer service, operational transparency, and security outcomes.

On his quest to find a solution to the company’s app gap, OutSystems was recommended. “What was appealing to me was the degree to which we could quickly customize the app to meet our client’s specific requirements,” he explains.

BRI Security partnered with local OutSystems specialists Phoenix Services and Do iT Lean. Then, it set about making its vision of an app a reality, seeking feedback from its biggest client throughout the early days of development.

In just two months, thanks to the agile efforts of four Phoenix Services and Do iT Lean developers, the first version of the BRI Operational Support System, or BOSS, went live. A fuller version followed in August 2017, one month ahead of schedule.

Pedro Carrilho managed the engagement for Phoenix Services and believes a traditional development approach would have taken three to five times longer due to the app’s particular offline operation requirements and integration demands, which included rostering systems and Google Maps.

“We rolled out to iOS really quickly, which would have been really hard without OutSystems,” Pedro explains. “That task alone would have taken us seven or eight times longer.”

With BOSS, BRI Security’s field operatives can receive job information, record observations, attach pictures, log their breaks, do “welfare checks,” and more—all on their mobile devices. BOSS also automatically compiles a full report when each operative completes a shift. The company’s clients then receive these reports instantly. And what’s more, they can access the data collected in BOSS from their customer portal, monitoring the activity of their contracted staff in real-time through geolocation, push notifications, and multiple data visualizations.

Finally, the BOSS operations portal allows BRI Security to view automated, accurate information from its clients. And with that data, it’s easy for them to minimize administration and customize their service delivery, optimizing patrol patterns for a client from one night to the next, for example.

Results -The BOSS app and the collaborative nature of its creation have helped BRI Security deepen its relationship with its largest client. As Ying Loong explains: “The client was really pleased with the results. It surpassed all their expectations about what we could do and how quickly we could do it.”

BRI Security has rolled out BOSS to more clients, and now the app is also delivering:

Users love it too. Security guards even download BOSS on their personal phones and not just their corporate devices.

Plus, BRI Security’s decision to build BOSS on the flexible OutSystems low-code platform continues to pay dividends. In early 2018, it acquired SNP Security and began the process of expanding its user base from 1,500 to over 4,500.

“With the acquisition, the benefit of developing BOSS on OutSystems became quickly apparent. We could rapidly integrate it with SNP’s systems and roll it out to SNP’s clients as well,” says Pedro.

It all adds up to increased customer acquisition, including contractual obligations worth millions, as BRI Systems repositions itself as a provider of customized, ROI-maximizing security services.

“The way OutSystems visualizes development is very much in line with our own ethos of delivering fast, customizable solutions,” says Ying Loong. “Every client is different. And now we can meet their individual needs.”

How to Do It with Low-Code series

Explore what you can do with low-code in this blog series, from consuming/exposing APIs to building PWAs and chatbots.