Asynchronous vs. Synchronous Programming: When to Use What (Using Low-Code as Example) 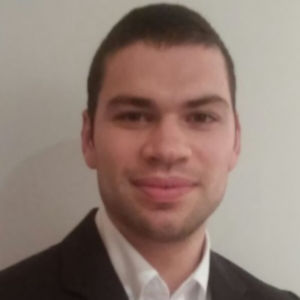 Asynchronous and synchronous programming are programming models that are crucial for designing and executing software. In this blog post, we’ll explore these two terms in greater depth to clarify when you should use async or sync processes when creating an application. To help me in this quest, in the second part of this article, I’ll design a system that follows asynchronous programming principles using a low-code platform. However, if you’re not interested in low-code, don’t run away just yet; you can implement these principles using your preferred technology.


What’s the Difference Between Asynchronous vs. Synchronous?

Before we jump into the juicy stuff, let’s start by defining the difference between asynchronous and synchronous programming.

What Is Synchronous Programming?

In synchronous operations tasks are performed one at a time and only when one is completed, the following is unblocked. In other words, you need to wait for a task to finish to move to the next one.

What Is Asynchronous Programming?

In asynchronous operations, on the other hand, you can move to another task before the previous one finishes. This way, with asynchronous programming you’re able to deal with multiple requests simultaneously, thus completing more tasks in a much shorter period of time.

With parallelization, you can break what is normally processed sequentially, meaning break it into smaller pieces that can run independently and simultaneously. Parallelization is not just related to processes and capabilities but also with the way systems and software are designed.

The biggest advantage of applying parallelization principles is that you can achieve the outcomes much faster and it makes your system easier to evolve and more resilient to failure.

So, Should You Choose Asynchronous over Synchronous Programming?

In one word: no. Although the benefits are aplenty, not all processes should follow parallelization principles and execute asynchronously. Let’s explore when you should apply asynchronous programming and when sticking to synchronous execution is the best option.

When to Use Asynchronous vs. Synchronous Programming?

You should only use asynchronous programming if you’re dealing with independent tasks.

When designing a system, here are a few considerations you need to have to define which programming models you should use:

Should You Choose Asynchronous Over Synchronous Programming?

In one word: no. Although the benefits are aplenty, not all processes should follow parallelization principles and execute asynchronously. Let’s explore when you should apply asynchronous programming and when sticking to synchronous execution is the best option.

When to Use Asynchronous vs. Synchronous Programming?

You should only use asynchronous programming if you’re dealing with independent tasks.

When designing a system, here are a few considerations you need to have to define which programming models you should use:

Tech Talk: How to Use Asynchronous Techniques

Learn when and how to use asynchronous techniques in OutSystems.

Take a look at the image below. On the top, you can see that in synchronous execution, the tasks are executed in a sequential way; the products are the first to be executed, then customers, and finally orders.

Now, imagine that you concluded that customers are independent of products, and vice-versa, but that to execute orders you need the information from products first—there you have it, a dependency. In that case, the first two tasks can be executed asynchronously, but orders can only be executed when products are completed—so, they need to work synchronously.

As a result, by applying parallel computing and asynchronous programming when dealing with independent tasks, you’re able to perform these tasks way faster than with synchronous execution because they’re executed at the same time. Thus, your system releases valuable resources earlier and it’s ready to execute other processes that queued faster.

How to Design a System that Runs Asynchronously?

Designing a system that follows asynchronous programming principles can be quite complex, so I’m going to show you how to do it using a typical claims processing portal. Something like this: 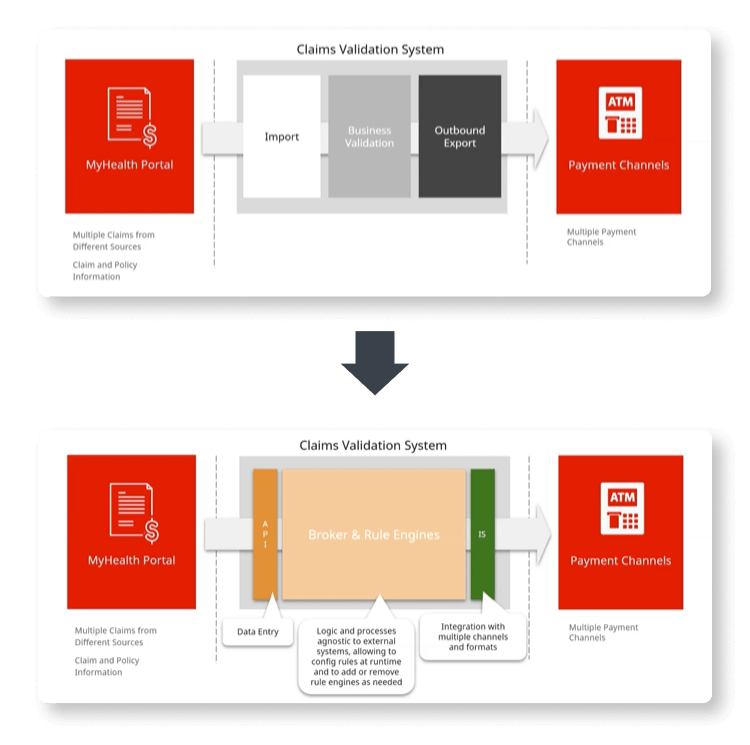 Here, we have the portal that policyholders and other entities use to insert and manage claim information. This portal communicates with a claims validation system through an API.

Looking in greater detail, the validation system imports data to a business validation engine that includes a broker and business rules whose processes and logic are agnostic to external systems. Then, this system integrates with payment channels to where it exports the outcomes of the business validation.

As I said in the beginning I’m going to explain how to design this system to run asynchronously using a low-code platform—OutSystems. If you’re not an OutSystems developer or architect, you can still use this demo to automate parallel asynchronous processes with your preferred technology.

Before we get our hands dirty—I promise, we’re almost there—because I’m using OutSystems, I need to clarify a few terms and capabilities I’ll be using. If you’re already familiarized with them, or you simply want to see the proposed architecture to improve the efficiency of this claim portal, you can skip to the next section. 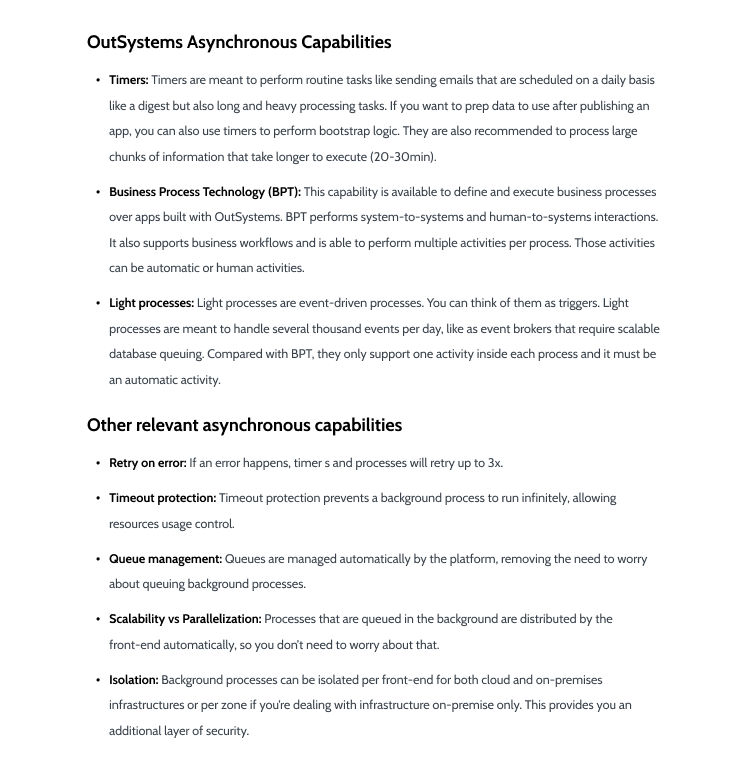 Let’s zoom in to the claims validation system:

The API is going to insert each of the claims into a staging data. Then a timer, that is scheduled, is going to look into those claims. Note that each claim is a structure that can have multiple records inside. So, the timer is going to validate and decompose those claims and records and perform a Bulk Insert into the business entities for the claims.

Now, we want to be able to optimize our resources as much as we can. For that reason, we’re not going to process each one of the records as soon as they’re inserted into the table. We also want to remove the overhead of the starting of a validation process, so we’re going to use a bucket control which is basically a record where you’re going to specify which is the initial record and which is the end record. So, this bucket is basically an interval of records and claims that are going to be processed.

With that, for each bucket record, we’re going to trigger a light process that will process each of the records inside the bucket. By processing I mean applying the rules. These rules are engines that can be plugged and played, so they can be added at runtime into the system.

Once a record is processed, if it’s considered valid according to the business rules, it will be set as such and a timer will aggregate the data and send it to the channel accordingly.

That said, here’s our proposed architecture:

First, the Claims API will collect all the data that is imported through a JSON structure or XML. Each data is then inserted into the staging entity. The goal here is to speed up the data insertion and prevent losing data.

Once the data is inserted, a timer is launched on a scheduled basis. The purpose of this timer is to decompose claims based on Claims Rules previously pre-defined and perform the Bulk Insert. Based on those rules, the claims will be inserted in the Claims Service.

The number of records inside each bulk is the number of records you can process within a three-minute limit. At this point, you should avoid having parallel capacities still available and only run one light process at a time because you are specifying a bucket with a large number of claims inside.

Once the bucket control is created, then a light process is triggered.

And the triggering is going to execute the process.

So, the Claims Broker Engine is going to get the rules that were predefined in the Claims Rules and, based on the configuration, the rule engine endpoints—which are basically REST APIs because we want to be able to plug and play rules engines in our system—are identified and the execution is queued.

Once we get all the rule engines that we need to execute that particular type, and have the endpoints for them, we’re now going to call them sequentially. So we’re going to apply those rules on top of claims data.

As a result of each rule, a claim will be considered “valid” and thus proceed to the next step, or “not valid” and, in that case, rejected by the system.

Finally, the system will have a timer that based on priority is going to get all the valid claims, aggregate them, and send them to payment channels.

You can also make the prioritization rules more complex. For example, you may want to define that certain claims should be sent as soon as possible so they would need to be sent right after they’re validated by the system and are ready to be paid; or you may want to define certain claims as low-priority and, in that case, can be processed by the timer.

Another benefit of using this type of step-by-step rules in the engine is that the system can also recover from a timeout or even a crash. Imagine that after processing rule one but before executing rule two, there's a timeout or a catastrophic failure in the process and the system needs to recover from it. With this system, each of the claims is available to recover from the exact point where it was before the incident. So, in this case, the claim would recover and execute rule two instead of repeating rule one.

I hope this article helps you clear up any questions you may have about when you should use asynchronous or synchronous programming. To wrap it up, here are the main key points:

If you want to see this scenario in action, take a look at my recent TechTalk, How to Use Asynchronous Techniques in OutSystems. There, I will show you the solution proposed here while leveraging the OutSystems asynchronous capabilities, fostering scalability and resilience to failure and ready to handle large data volumes.