With the pressure to deliver new customer and employee digital experiences and adjust existing enterprise systems to cope with the market changes, Forrester Research estimated that 75% of app development would use low-code platforms by the end of 2021.

From increased developer productivity to improved corporate agility and faster go-to-market, low-code benefits are plentiful compared to the cost and time it takes to create software with traditional development approaches. But, what is the quantified return on investment (ROI) of low-code platforms for your business?

Looking for the right low-code platform to transform and accelerate your software delivery strategies? Here’s what Gartner has to say about the top low-code providers.

What would you do differently if you found that:

Let me unpack each of these three claims based on the 2022 Forrester TEI(™) study.

But first, a quick disclaimer: like any other software development technology, not all low-code development platforms are created equal. Use cases, available features, developer experience, pricing model, even the targeted user can vary from platform to platform. So, the ROI of the different low-code platforms will also vary depending on several factors.

Similar to other five leading vendors that commissioned Forrester Consulting to conduct a study to discover their customers’ ROI using their platforms, OutSystems also commissioned research to find out the ROI of its high-performance low-code platform.

Join this webinar with Forrester, where we'll explore the changing build vs buy economics and how low-code can help you.

The Framework of Low-Code ROI

This TEI study is a Forrester Consulting analysis that evaluates the financial impact of adopting a technology. It considers the cost, benefits, flexibility, and risk factors that affect the investment decision.

The study is based on Forrester’s interviews directly with OutSystems’ customers using its low-code platform. Forrester Consulting then compared the results the customers reaped over three years with a composite, modeled organization based on the structure and resource characteristics of the interviewed organizations.

“OutSystems reviewed and provided feedback to Forrester, but Forrester maintains editorial control over the study and its findings and does not accept changes to the study that contradict Forrester’s findings or obscure the meaning of the study.”

And here are the key findings. 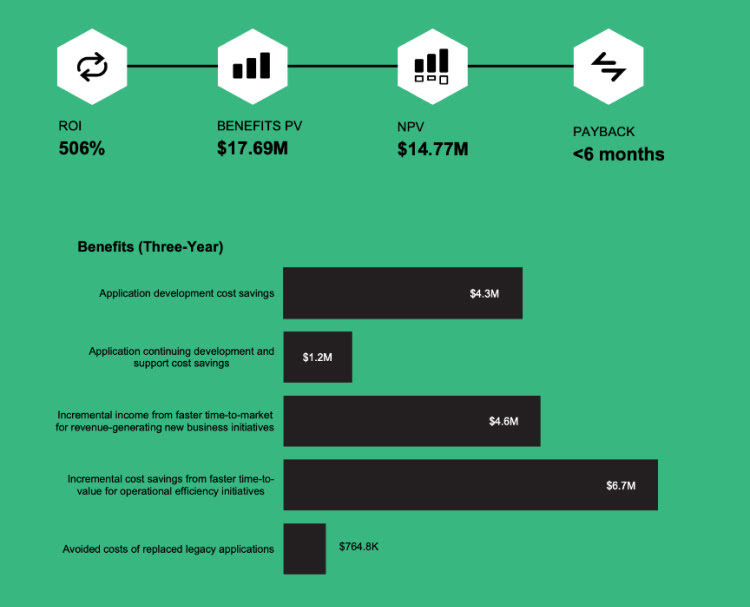 You can read the full Total Economic Impact™ (TEI) of OutSystems study here.

While organizations are dealing with a worldwide developer shortage, OutSystems customers are able to maximize the productivity of their existing dev teams and boost collaboration between business and dev to get software delivered more often, just like digital natives organizations.

These development cycle savings can be 24% of customer total benefits, or up to 4.3 million dollars in the TEI study.

2. Cost Savings of 7%—Up to $1.2 Million—in Continuous App Evolution and Support

Applications developed with OutSystems cost less to maintain and change by design. The study also shows that these savings continue to accrue year-over-year. These savings are typically above 7% of customer total benefits and reached up to 1.2 million dollars in the TEI study.

The fundamental high-performance low-code features for these benefits are similar to those listed in the previous point, namely:

As one of our customers presented to a large audience,

“The more you build, the less you have to build.”

Because the bigger share of new applications that you reuse and don’t start from scratch.

This point often escapes new users of traditional dev or regular low-code platforms, so it is highlighted by Forrester in the report as the Portfolio effect.

By improving the efficiency and productivity of their developer resources, OutSystems customers can launch new and impactful business initiatives to the market faster, such as customer-facing capabilities, as highlighted by one of the interviewees.

This way, organizations also reap the financial benefits of those initiatives months faster than they would with traditional development approaches.

4. Cost Savings Amount to 38%—Up to $6.7 Million—From Faster Time-to-Value for Operational Efficiency Initiatives

With OutSystems, organizations can shorten the duration of development projects and launch internal initiatives that improve the company’s agility and efficiency outcomes much faster.

These initiatives include tools to replace manual and time-consuming activities, leading to cost savings of 6.7 million dollars. 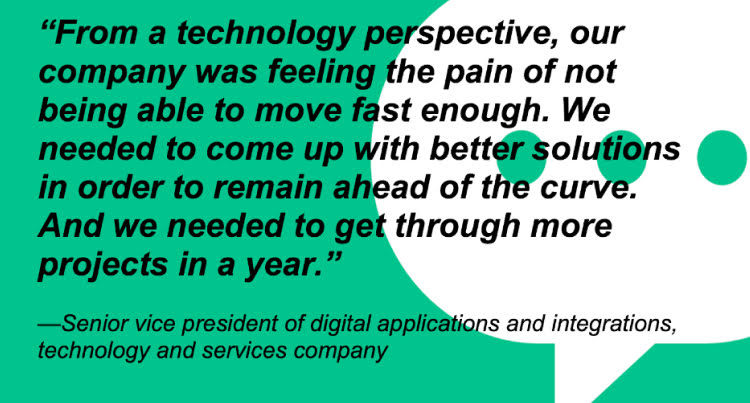 Organizations can also save hundreds of thousands of dollars from ongoing vendor fees by using OutSystems to build new applications to replace legacy systems.

In addition to the quantified benefits mentioned above, companies that adopt OutSystems high-performance low-code platform also reap other benefits included in the TEI study. These benefits were mentioned by OutSystems customers but not yet quantified:

The ROI of High-Performance Low-Code vs. Competition

So many of the technical arguments can be justified with platform functionality, but the fundamental comparison question remains:

"How does platform X compare to competitors in ROI terms?

And this is where OutSystems' high-performance low-code platform leads the pack of the main platforms in the low-code market.

For your team evaluating the ROI comparison among leading vendors, this research and the summary in the next chart can save your company money and your team lots of time.

The TEI study reports that the OutSystems high-performance low-code platform paid for itself in less than six months and delivered a 506% return on investment over three years.

And if you want to learn more about other examples of customers’ ROI of OutSystems, take a look at our customers' cases like:

A passionate product owner, Miguel is focused on creating value for enterprise customers through business-focused technology. After 20 years in software in the US, Europe and South America, he is currently crossing the chasm for RADically faster technology that revolutionizes the creation and delivery of enterprise applications for mobile or web.

High-Code, Low-Code, No-Code, or COTS: How to Choose the Right Approach for Your Business?

Rethinking Developer Productivity: Challenges to Measure It and How to Maximize It

Delivering ROI Is the Best ROI