Everyone has heard of Sun Tzu, the oft-quoted Chinese general, military strategist, and philosopher who wrote The Art of War. His musings on military strategy defined his legacy, but it was his philosophical beliefs in yin and yang (balance) that defined his views on strategy and life in general. Today, Tzu’s philosophy is taught in many business classes and put to work by CEOs around the world.

I consider myself a problem solver. Not Sun Tzu level, but I believe in planning and understanding the business environment I’m in. No matter what the business or the challenge, I love to hear those nine little words, “We have a problem, and we need your help.” Ah, music to my ears!

Try to See it Once Their Way

Customer success has always been something OutSystems CEO Paulo Rosado, addresses when he speaks to the OutSystems family or when given an opportunity to talk about the company’s success. Without customers, there is no OutSystems. He knows it, and we know it. Our customers are at the heart of everything we do.

Two years ago (two whole years!), I was working with our support teams on some initiatives. Some of these you may already be familiar with if you are an OutSystems customer. One is our Success Program for new customers to make sure they get the onboarding support they need, which includes unlimited (yep, “unlimited”) access to our online support teams.

And that is where my story leads us. Two years ago, we were just starting this crazy, hyper-growth mode we are in now. The market was beginning to see the value of low-code, but it was still reasonably new. And even with our Success Programs, our help and support teams were getting swamped with requests for assistance. Many of these were the day-to-day support requests you get with any software product or service. Not hard, just time-consuming.

It became clear to us that our then relatively small support team was not going to cut it when we hit our stride. And we knew we could be more efficient with automation in our support processes. The time was right to step back, take a look at our support operations, and put something in place that would let us scale up as the business grew.

“In the Midst of Chaos, There Is Also Opportunity.”

After a review of our current capabilities, we realized that a complete rip-and-replace was in order. Now, I know what you’re thinking, “If this isn’t a perfect opportunity to use your own product, I don’t know what is.” And, yes, we could have built our solution. However, daily support and call center processes are the same the world over; they are commodities that we should invest in, not build. So we started looking for an outside vendor that could bring some sanity in the form of industry best practices to our support staff needs. (For more information about when to buy and when to build, check out Paulo Rosado’s article in InfoWorld.)

It became obvious fairly quickly that only a couple of companies could offer the scale we needed along with an ongoing commitment to keeping their staff trained to keep up with the evolution of our platform.

“Ponder and Deliberate Before You Make a Move.”

Once we had an idea of the offerings available as Customer Support as a Service (CSaaS: that’s new; we just made it up), we were better able to explore what could be handled by a CSaaS company and what OutSystems would still want or need to manage.

And while we were comfortable outsourcing certain aspects of our support functions, we didn’t want to lose the “feel” of hosting it ourselves. We believe that to tap into your customer base and understand what’s keeping them up at night; you need to be more involved than just getting a dashboard report every week with response metrics.

What we submitted in our RFP was a needs analysis that combined real people (staff) and a software platform that was customizable on the front-end to address our customers’ diverse requests. It would also need to allow OutSystems to tie into the CSaaS and create additional support processes that could be managed by OutSystems in-house support teams on the back-end.

Zendesk stood out, hands down. What we liked:

You can only train support staff so much before their heads explode. It’s just impossible to train everyone for every possible scenario. Ultimately though, support’s success is predicated on the information they have available to them and the ease with which they can access it.

And so (“...we shall go to war! Yar har har...”), OutSystems built a CRM system to integrate with Zendesk. One we could steadily update with information about new features of the platform, tips and tricks we developed or learned from our customers, and problem resolution data that was easily cross-referenced for significantly faster response times.

To supplement the CRM knowledge base, we also held day-long jam sessions involving OutSystems, our customers, and Zendesk support staff so everyone could learn from each other, get to know the lingo and culture of our customers, and generally get a feel for how everyone operates.

While that was all going on, OutSystems created a true, world-class support environment to help us meet our customers’ needs now and in the future.

“Great Results Can Be Achieved with Small Forces.”

Once we had a plan, it took us just about a month (OutSystems low-code is THAT fast) to build the back-end support systems we needed to tie into Zendesk and give our customers the smooth, beginning-to-end support and resolution center they deserve.

In fact, our support process is so smooth, you won’t know whether you’re talking to Zendesk or OutSystems, and that’s the way good support should be.

Some of the functionality we built into the system includes:

This system also ties into our operational processes. Users automatically receive notifications about:

“Rewards for Good Service Should Not Be Deferred a Single Day.”

Perhaps truer words were never spoken. For OutSystems, the rewards have not been deferred. Every day, it seems, our efforts are recognized and rewarded by either industry analysts, independent auditors, and most recently, investors.

Today, thanks to the help of Zendesk and our own OutSystems support staff and custom CRM, we support the low-code development efforts of thousands of customers worldwide.

It’s also not lost on us that our active community of more than 137,000 developers, CIOs, and IT business leaders around the world are out there every day working with our platform, building and sharing reusable code and templates, and generally helping us evangelize the benefits of low-code. 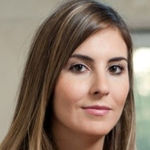 Ana is not a developer herself, but she works side-by-side with many of them every single day. She loves tackling those big challenges that might have a great impact on the business or the efficiency of customer operations. And, supported by the power of technology, she knows there's no limit to the success she can help attain.