Mobile touch gestures have become a vital part of every single app, a part that most users don’t even realize is there. Who doesn’t love (smooth) interactive apps?

"The rise of touch and gesture-driven devices has dramatically changed the way we think about interaction. Gestures are more than merely entertaining, they are very useful and feel familiar," Nick Babich, In-App Gestures And Mobile App User Experience. (Yes, what he said.)

And yet, it is incredibly easy to hate the mess and math that might come with it. A shocker, I know, especially when you are not the one who did the first piece of the code or if you are there only to maintain it.

It can be, at times, a thankless job. The kind that leaves you staring at the screen with one hand on your forehead while the other is resting on the mouse, scrolling time away.

Having  — dare I say it? — silky smooth  mobile touch gestures and their animations can be a challenge and one that becomes more and more prominent as the days go by. But that is a battle for another day. Or another article. Or both.

Today, I want to show you how to create a native-like menu with gestures.

Let the alpacas take the stage!

So, before I move on to the actual code, there are a few things I want to go through, so bear with me.

All You Need to Know About JavaScript Touch Events

I’m going to use JavaScript events to detect my mobile touch gestures. In this scenario there are:

And You Need To Know About requestAnimationFrame, Too

These events need to be able to detect and distinguish between drags, taps, and flicks and do different things accordingly. So, when you’re playing with mobile touch gestures, think about:

In my case, I want the direction of the gesture to be horizontal only because I want the scroll to function normally. I have limits, and I want it to go back to the beginning or end. It depends on how much the user has dragged and the speed of the finger against the screen.

I know you want to get to the interesting part of mobile touch gestures, but I have to cover this first because it affects your code. Yes, it’s time to discuss variables. The good news is I’m going to also explain why they have to be set and their values. These functions are going to make the code look cleaner.

Ahhh, so much fun! Look at the number of variables needed; just what most people tend to skip. (Don’t. You’ll regret it if you do.)

Very straightforward, really. In this order, the code is less cluttered, less scary and easier to digest.

Function in the Functions

These functions are called by the EventListener even if they are not the ones that do the actual animations or the calculations necessary to make the menu work.

All these variables are used for the math involved in the animation. For the sake of readability, and so there aren't too many lines of code in a function, I separated them all into smaller ones.

The Interesting Part of This Mobile Touch Gestures Stuff - Finally!

Now that my explanations of touch events, variables and functions are out of the way, it’s time for me to focus on describing how to create the animation. This is exactly what makes the menu move and all the math and algorithms behind that.

Start of the Animation

This code will run every time you touch the screen. This function will be used as a reset to defaults depending on what happens to the menu since you last lifted your finger.

Middle of the Animation

The first thing you want to know is the direction of the gesture.

In a menu, vertical scroll really isn’t something to care about. Meaning, in terms of gesture-related code, the behavior itself should be the default scroll. Therefore, identifying when it’s one or the other is what is needed here:

Without preventDefault, this is what would happen:

This is definitely not something that you want to happen with your mobile touch gestures, so consider this: Are you interested in reading what is hidden by the scroll when you are opening/closing the menu? If your dragDirection is Horizontal, you can’t scroll.

We Need Some Boundaries Here! (Setting the Limits)

So, remember when I said I had limits? In this example, the menu is hidden on the left part of the screen. So, if the menu is closed, the variable moveX starts off as -menuWidth — and I want it to be dragged to the right until it is fully shown.

You could call this the moving interval. This is what tells the script exactly where the menu is in the window.  I used moveX because of the way I do the actual animation. Go to the updateUI function  — the function called by the requestAnimationFrame — and this is what  you have:

I want the animation to be seamless and smooth. For that, the smaller the intervals the script can detect and use for translateX, the better. The goal is not to see the jump caused by using translateX instead:

Now that this is done, the next step is to calculate how the fade of the overlay is going to work.

However, the calculations are not quite so linear. The problem is always the zero which breaks the three-way rule usually applied  in these cases.

Here, I am ensuring  that the menuWidth corresponds to 100% and the current position (moveX) corresponds to a percentage. The percentage that follows what I’m  looking for in this calculation:

This calculation is needed because opacity doesn’t really work unless it’s between 0 and 0.5 (as defined in the variables). If 0.5 opacity relates to 100%, the percentage will be the desired opacity.

End of the Animation

The first thing to remember is that someone  can simply just click, which the events recognize as a touchstart and touchend. And if it is a click, nothing should happen to the menu.

What is meant to happen when the drag finishes?

So what is considered enough to open the menu? Five pixels moved? Well, this menu can open or close based on the distance. That is, if you drag it past the middle of its width, and if the speed of the drag  is greater than the defined velocity.

And that’s it, you have a working touch-based menu! Stay tuned, because more examples of creating mobile touch gestures are coming soon.

Codepen to browse the CSS and JavaScript 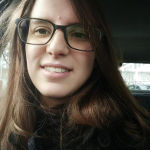 Rita is a Mobile and Front-End Expert and loves cute things nearly as much as she loves JavaScript.