Because OutSystems is all about visual development, word clouds resonate with us. They take a lot of aggregate text data and make sense of it by showing the most commonly used words in a nice visual “cloud,” just like OutSystems! And being a company born of developers, our brains just like things packaged logically.

Most word cloud generators, by default, ignore things like “determiners” (the, an, and, etc.) so what you’re left with are nouns, adjectives, verbs—the good stuff.

Don’t worry; this isn’t a grammar lesson. It’s a bit of a brag instead because OutSystems was just given the TrustRadius “Top Rated” award for “Rapid Application Development / Low Code.”

Rather than talk about the methodology TrustRadius used to come up with its “Top Rated” companies, we thought it would be interesting if, instead, we showed some of the reviews from the customers who recommended us because that’s really how we got to be “Top Rated.” We didn’t want to pick these reviews randomly, though. We wanted order and method. And that’s where the word cloud came into play. It was the perfect way to help bubble up the top reasons why companies rated us so highly.

This is what the most recent 20 reviews looks like. 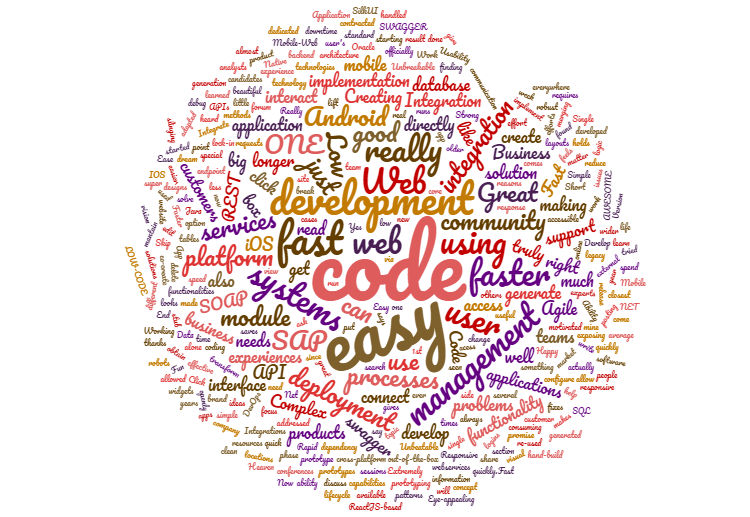 It’s supposed to be shaped like a cloud, but the design seems to have gotten a little lost. Still, there’s no doubt about the messages our customers are sending. Let’s take a look at a few of them.

1. It’s Fast (Or “Really Faster Code” Depending on How You Group The Words)

“LOW-CODE Heaven: No longer [sic] do we spend our life slinging code. Now, the OutSystems ‘robots’ generate all the code for us. I will say it's super clean too. I tried to hand-build code that runs faster... I couldn't. On average, OutSystems-generated code was 40% faster than mine both on the .NET and SQL side.” - A C-Level Executive in Information Technology

We were unaware there was a “Low-Code Heaven,” but you can bet we’re already figuring out how to work that into our Google Adwords!

It’s true, though. OutSystems is designed to not only be more intuitive, but also more repetition friendly so that you don’t have to hand-code the same things over and over. This means that you can spend more time on tasks that advance your project and less time tweaking data modules for multiple usage instances.

“Easy communication with other core systems, making it a really good option to interact with older systems. This gives them a great lift up with the OutSystems user interface.” - A Senior Consultant

We chose this perspective of “easy” because we covered the simplicity of OutSystems in the first reason. One thing that sets us apart from others is how easily we can integrate into existing systems. Integration with SOAP and REST services and SAP systems is built in. And OutSystems generates all the methods and data structures needed to integrate with external systems. Developers will notice almost no difference between invoking an OutSystems method, a REST API, or an SAP BAPI.

Combine this with automated staging across environments, full redundancy analysis, no downtime, and automated rollbacks. Now it’s clear that OutSystems is as well suited for established companies wanting to transform legacy systems as it is for new mobile applications across iOS, Android, and Windows.

The third word that jumped out at us was “management.” But when we dove into the actual reviews, there wasn’t just one reference to a particular management aspect of OutSystems that people kept referencing. Rather, it was several different things:

The gist here is that OutSystems doesn’t just shoehorn into systems and create an additional layer of complexity. Nor does it create large, proprietary systems that require herculean efforts to update and deploy.

During development, OutSystems makes it easy to create all parts of the application stack. For mobile app use cases, OutSystems Now offers native iOS, Android and Windows apps that use the device’s native functionality for a more natural experience. And when you make changes to an app, they are instantly available in OutSystems Now so you can avoid a lengthy app store approval process.

OutSystems also incorporates consoles for operations, deployment, and environment management. There’s also the Forge, which houses open-source modules, connectors and components so you don’t have to go looking for them.

We’ve had some fun with this award here, but we really are excited about it. This kind of validation from the people who use OutSystems reinforces like no other why we do what we do.

For more information about the TrustRadius Top Rated Award for 2018, check out their blog post.

And don’t forget that OutSystems was just named a “Leader” in Gartner’s Magic Quadrant for hpaPaaS. Get more information on hpaPaaS and download a copy of the report on our site. 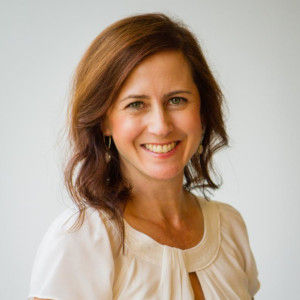 I run Customer Voice at OutSystems, which includes helping OutSystems customers share their experiences with the world. In this role, I oversee the strategy for cultivating strong customer relationships, while keeping a close eye on engagement programs. As a result of this inspiring experience, I have a seasoned perspective on the importance of relationships and customer experience. When I’m not keeping busy with OutSystems and our team, I enjoy travel and exercise.