A component architecture is a type of application architecture composed of independent, modular, and reusable building blocks called components. When designing an app following component-based architecture principles, developers combine, reuse, and version these objects, saving a lot of time from building every inch of an app from scratch.

Let’s be honest: in times of uncertainty where speed is paramount, meeting the increasing app demand while maintaining the ever complex existing technology well-oiled it’s a herculean task for any development team. The value proposition of a component-based architecture is that it boosts application development time and reduces code fragmentation.

But before diving into the reasons to invest in this type of application architecture, let’s start from the  very beginning, because the sustainability of any component architecture lies on the quality of its components.

What Is a Component?

A component is a reusable object that speeds up application creation and delivery and provides additional features. It turns code for common use cases, such as accessing a device’s GPS or calling an employee directory, into a module. Developers can easily add this module to applications so they don’t have to repeat themselves. They don’t need to write custom code for a common feature or capability that numerous applications require, significantly reducing time and effort.

Components are multifaceted. They can serve as infrastructure pieces for your factory, added to more than one application. They can also live in a public component repository so multiple apps and developers can use them. Publishing them to a repository helps several people in numerous scenarios.

Generally speaking, components can be dedicated to specific application layers, such as back-end or user interface.

For different layers of an application, there are different types of components, including:

To learn more about this, take a look at the OutSystems complete guide to creating components.

Advantages of a Component-based Architecture

Because of their structure and what they do, components have a number of advantages that are strengthened by a component-based architecture. Here are my three favorite benefits.

Say goodbye to searching for other applications where similar code might be used. Components enable the centralization of specific pieces of code. Because code is in one place, developers have more control over it. And, every time there’s an update or a fix, every implementation of their code will be updated and bug-free without the extra effort that can haunt their dreams.

Now, imagine an architecture based on components. You, your team, or your teams only have to debug, update, or perform tests in one implementation, considerably lowering the maintenance cost of your factory. Dependencies are no longer a nightmare; instead, they are part of a manageable process.

2. Faster Development to Save Time and Increase Revenue

Because of the reusability aspect, a component-based architecture reduces the number of developers needed to quickly create amazing apps, freeing your team to focus on more impactful business requirements. Logic components are context-free and front-end components already have great UX and UI. Therefore, developers can focus on implementing (only) the glue between them, in accordance with the application’s business rules.

Not only that, but system attributes such as security, reliability, performance, maintainability, scalability, and usability (known as non-functional requirements or NFRs) are also guaranteed. As a result, your developers only have to consider them once and rest easy, knowing that things like performance, scalability, and security are already taken care of.

In addition to that, the ownership of a component is clear to everyone, since there’s always a DRI (directly responsible individual) responsible for maintaining and updating the components, thus processes of change management are much more streamlined and easy to carry out.

Broadly speaking, developers have specialized skills. For example, there are JavaScript masters, CSS gurus, and .NET experts. However, this doesn’t mean that your developers can’t build an application that requires skills other than their own. That’s the beauty of a component-based architecture.

With this model, developers can visit other developer communities and search their repositories for the component that suits their scenarios the best! 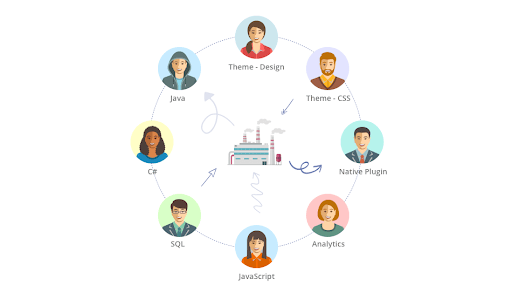 Component-based architecture allows for easier, faster, and robust development. Companies with libraries of solid and ready-to-reuse components are able to shorten the duration of projects. By using well-thought-out components and modern application platforms, you can ensure that a successful project sees the light of day a lot faster.

Using a component-based architecture not only shortens production and delivery time, but it also frees up the resources required to ensure a quality delivery. For example, there is more time for code review and testing.

If you want to give this architecture a try, take a look at OutSystems free edition. With the OutSystems platform you have access to: