Many software vendors claim to offer a low-code development platform. In fact, one independent analyst compiled a list of more than 85 vendors in the low-code space as of April last year.

Many of these so-called “low-code vendors” talk about the benefits of low-code development platforms in general terms on their web sites and sales materials. In doing so, they gloss over the fact that not all low-code vendors’ products offer the same capabilities.

To be clear, the benefits of low-code and the benefits of self-identifying low-code development platforms are not perfectly 1:1. Low-code is a technology, much like the wheel. The wheel by itself isn’t terribly useful. But, when applied properly, wheels help us perform tasks seemingly impossible before.

It’s the same with low-code. Low-code is applicable to nearly any use case the enterprise can throw at it when coupled with capable supporting tools and framed within an intelligent low-code development infrastructure.

In order to pass the "low-code platform" sniff-test, most low-code solution providers offer a set of standard capabilities, such as development services for basic web and mobile applications, or basic data management and mapping.

Some no-code solutions also offer similar functionalities. However, no-code solutions are, by their own admittance, exclusive to certain use-cases and built for a particular subset of users. For that reason, we aren’t including them in our discussion here.

In addition, within the suite of basic low-code functionality, each vendor offers a certain "level” of expertise. For example, nearly all low-code solutions can create web and mobile apps, but some offer much more in terms of templates and best-practice capabilities for designing these apps. Other solutions may have originated as a purpose-built solution to solve a particular business need, such as business process management (BPM). Those same vendors call themselves low-code but the fact remains that their “sweet-spot” is still more geared towards BPM rather than true enterprise needs.

In truth, only a few low-code solutions can address the web, mobile, and core systems use-cases enterprises require.

One large analyst firm ranks low-code platform providers against more than 190 criteria to determine which vendor(s) offers the widest range of low-code capabilities and benefits. We don’t have time to cover all 190 low-code platform benefits here, but we do want to cover some of the biggest advantages a true enterprise-class low-code development platform has over no-code platforms or niche low-code solutions that are suitable for only a narrow range of use-cases.

Of all the benefits of low-code development, the ability to significantly and positively impact the delivery of new software and applications is the most important. In his August 2018 blog post, Why You Need To Know About Low-Code, Even If You’re Not Responsible for Software Delivery,  Forrester VP and Principal Analyst, John Rymer, wrote that low-code offers the potential to “make software development as much as 10 times faster than traditional methods.”

2.  Appeal to a Broad User-Base

Low-code development typically allows users to build applications in their preferred native coding language or using the visual modeler. Modern low-code platforms include the latest in third-generation language (3GL) support, giving professional developers the choice of using low-code’s inherent capabilities for faster app development (e.g., pre-built code modules, UI templates, etc.) with the option to switch over to hand-coding when they need to build something not included in the solution’s design library.

Some low-code solutions come with ample pre-built functionality and code that even non-professional users can build simple applications. These users are known as “Citizen Developers” or “Business Users.” Simply put, these users are technically minded enough to understand how to use a visual modeler to create applications, but they lack the professional developer experience necessary to build more complex applications, at least initially.

However, the ability to work entirely within the visual environment, even as a professional developer, is a big draw for those looking to save time over traditional hand-coding.

Since we are on the topic of citizen developers, one unique selling point of a truly enterprise-class low-code solution is that it includes built-in governance capabilities. What this means is that the low-code solution is administered and managed by the organization’s professional IT team. So, while business users can certainly use the solution to build apps they feel the organization needs, nothing can be deployed without the final involvement and approval of IT. Think of it as “managed freedom.”

Sometimes business users have amazing ideas for new business apps. But also, sometimes getting those apps greenlit by IT is difficult due to existing backlogs or budgets. This can give rise to “Shadow IT”, a term used to describe unsanctioned business users building (or sometimes just downloading) apps and using them as part of their daily processes, but without the knowledge and approval of the IT department.

Governance controls make it possible for business users to skip the front-end involvement by IT  (with ITs knowledge that it’s happening); develop the app on their own and then involve IT on the backend when it’s time to test and deploy the new app. This lets IT satisfy the desires of business users for apps that help them with their daily tasks while also ensuring that the organization’s processes and data remain under the close scrutiny of those who are entrusted with its security and success.

Traditionally, there are two distinct groups within IT: developers, and operations. Developers create applications. Operations is more complex. For simplicity, consider “Operations” as everything IT does that does not involve writing code, either manually or using a low-code solution.

These “non-code” tasks include things like security vulnerability scanning, testing, integrations, hosting, backups/disaster recovery, analytics, etc. An enterprise-class low-code development platform helps IT connect these disparate groups so that everyone can work together on a single platform and towards similar goals.

Some areas where an enterprise-class low-code platform excels is in the areas of:

The benefits of B2C applications are well-documented. They offer the ability to extend an organization’s physical presence online and in doing so, make it easier for businesses and customers to interact. This can also create challenges. How do you scale your services, support, and knowledge base to support an always-on, always-available demand economy?

This is where the benefits of low-code shine. With an enterprise-class low-code solution, you can create multi-channel touchpoints that include traditional web and mobile apps, but with the advantage of artificial intelligence and machine learning functionality built-in.

The addition of chatbots, and all the functionality of a live call-center, without the cost of a live call center, built into your web and mobile apps, let you quickly scale up to meet your customers’ needs.

Beyond the Low-Code Platform Pros and Cons

There are certainly differences in low-code vendors’ solutions and that’s to be expected. OutSystems pioneered low-code more than 15 years ago and since then, there’s been no shortage of both new and legacy organizations eager to stake their claim. And so far, it’s working.

In our 2019 Application Development Trends report, out of 3,300 respondents, 41 percent said they were already using low-code with 10 percent planning to soon. 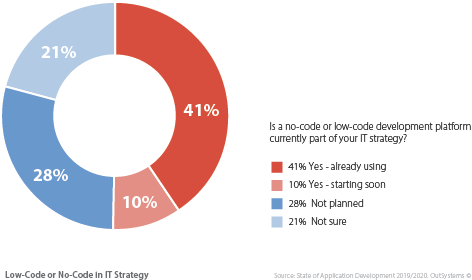 There is no doubt that adoption and awareness of low-code and the benefits of low-code development platforms are on the rise. Savvy business leaders are already developing strategies for low-code in their own organizations; 51 percent according to OutSystems research. The other 49 percent could face answering to the board and shareholders as to why the competition is stealing market share in the not too distant future.

As Forbes contributor and analyst, Peter Bendor Samuel put it, the role of the CIO is changing to match the new corporate charter focused on, “...building out and operating the new digital platforms and new digital operating models that are reshaping the competitive landscape.”

For the 47 percent of respondents in OutSystems 2019 SOAD report who said they are not currently using low-code, their number one reason for not using it was because they weren’t familiar with low-code platforms. Their other stated worries–will it scale, security concerns, and fear of vendor lock-in–while not unfounded given the performance of some low-code solutions, have certainly been debunked by industry analysts and vendors like OutSystems.

In addition to those covered here, the benefits of low-code development platforms are well documented–improved and consistent user experience, faster ROI, increased productivity–the list goes on.

If you still aren’t sure whether or not low-code is for you, we invite you to learn more about the benefits of low-code and the benefits of a low-code development platform, by visiting us at OutSystems.com. 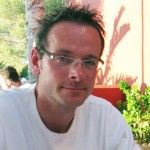 Jonathon Idle is the Chief Operating Officer of Green Lemon, an OutSystems partner.